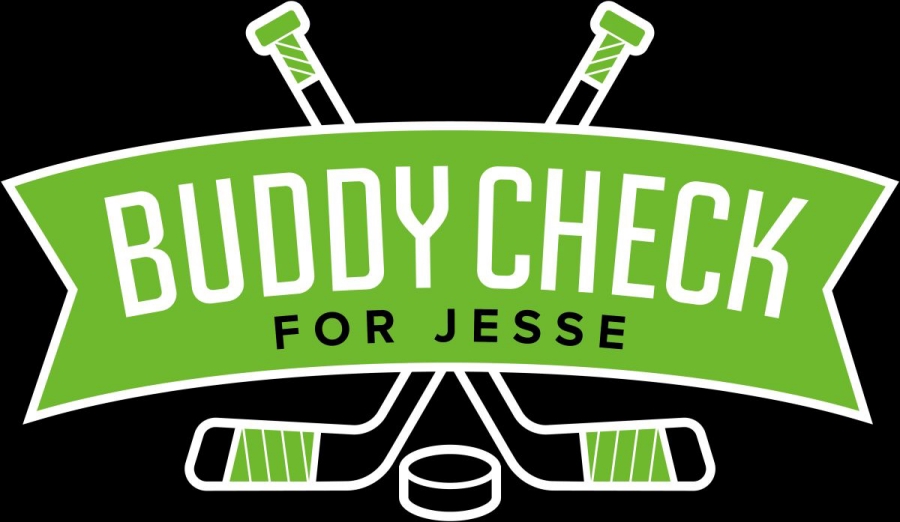 Saanich Minor Hockey Association is pleased to be participating in the Buddy Check for Jesse Mental Health Awareness program this season through their partnership with BC Hockey. We will be distributing green stick tape and other resources to our teams (atom through midget) over the next few days and encourage you to discuss this with your players. It is an important initiative to help normalize the conversation around mental health.

BC Hockey has partnered with Buddy Check For Jesse to provide a Mental Health Awareness pilot program for the 2018-2019 season. Buddy Check was created by Dr. Stu Gershman who unfortunately lost his son Jesse to suicide October 29, 2014.

BC Hockey is reaching out to teams to support Mental Health awareness by participating in Buddy Check For Jesse. The program was developed for hockey coaches to deliver a message about mental health to their teams. It began with Jesse’s dad, Dr. Stu Gershman, wanting to help his other two boys feel support, to take action, to create awareness of Mental Health challenges, and to support their teammates. Stu believes that coaches are in a unique position to share this positive message to help raise awareness that mental health issues can affect anyone.

Stu is proud to have partnered with BC Hockey, CBI Health Group, and Suburbia studios (amongst others) and is grateful for the support he has received with this project.

Each team will receive eight (8) rolls of green tape, green wristbands, mental health awareness cards, and a coach’s speech to be facilitated prior to a game on the weekend of October 27-28, 2018. All materials will be sent to the team’s General Managers the week prior and BC Hockey will coordinate shipment or pick up for the Greater Victoria Minor Hockey Associations. Please post any social media to Twitter or Facebook using the hashtag #BuddyCheckForJesse and #BuddyCheckBC.

We encourage all teams to start the conversation around Mental Health and utilize the resources provided to you for this initiative. Jesse’s family hopes that through creating this program in Jesse’s honour, it will help other youth and families.

As you may all know, the Pearkes Gold rink is 50 years old and requires extensive and expensive upgrades to keep it functional. Hockey Canada and other research shows that ice arenas have an average life expectancy of 30 to 35 years. Many municipalities raze rinks when they have reached this age.

Currently, the number of ice rinks in Saanich is far below what is provided by other municipalities in the area, and by what is needed by Saanich user groups. Saanich currently provides 2 rinks for a population of 114,000 which is a ratio of 1 ice surface per 57,000 people. In comparison, Esquimalt is 1 rink per 18,000; Oak Bay is 1 per 18,000 and Peninsula is 1 per 20,000 people. In order for Saanich to meet current demand and to be in line with other municipalities, we need a total of 5 rinks to bring the ratio down to 1 rink per 22,800 people.

PLEASE SIGN THE ATTACHED PETITION (click on the google forms link below), to ask that Saanich Council take immediate action to not only repair the aging ice rinks at Pearkes, but to also work towards constructing new ice rinks. 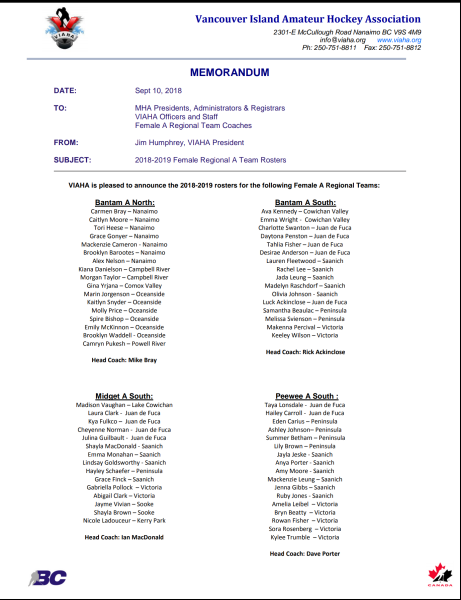 Congratulations to the SMHA female players who qualified for the Female A Regional team. 15 players from SMHA were placed on 3 teams (4 midget, 5 bantam, 6 peewee), the most of any of the 9 MHAs whose players are eligible.

There is plenty of misinformation and opinion going around and we think it’s important for everyone to just have the facts.

We are an association with over 500 players and 30+ teams, ranging from Initiation- Novice, all the way up to Juvenile. When faced with decisions, we must make them with regard to the impact they have on all of our membership, and not just at the representative hockey level. We also must make decisions based on what we have control over, and work within the rules and regulations that govern our association for the benefit of all of our membership. This means that we are impacted by decision-making at the VIAHA and BC Hockey level, with regards to the delivery of hockey on the island.

We are in a Co-op with VMHA and have been for several years with the express intention to offer more opportunities for more hockey players to play at the highest level possible, while still allowing us to provide excellent hockey experiences for the bulk of our membership participating in recreational level hockey. According to BC Hockey policies, the Co-op makes us a T1 association and that has always been the case.

When we started discussions around the VIAHA Host Association Pilot for the upcoming season, it was decided that Victoria Racquet Club would be the only Host T1 association in our catchment area (AKA Zone). This incidentally is not something that SMHA was opposed to, and in fact we supported it as the easiest solution for the one year pilot. By supporting VRC as the only Host T1 association, our aim was to compete at a T2 level. It is important to note that we applied to BC Hockey for an exemption to compete at a T2 level within the proposed VIAHA Pilot so to support VRC in being the only T1 association in our catchment, and for SMHA players to have the choice to try-out for the respective division VRC T1 ‘zone’ team through the proposed Residential Waivers Host Association Pilot (AKA the VIAHA Zone Pilot). The request for us to be a T2 association was not granted, and we were notified in early July by BC Hockey that the Co-op would remain a T1 association as it has been since its inception.

In the last memo that we sent out we asked everyone to wait until the discussions between VIAHA and BC Hockey were completed prior to registering your young person in another T1 association because we knew that there was not complete alignment between VIAHA and BC Hockey in how this pilot would be applied. These discussions occurred and as expected, it had a meaningful impact on our association and the Co-op.

BC hockey among other things insisted that it not be called a Zone Pilot Program as it would be confused with a pilot project they have been running in BC for the past two years. They also insisted that we not only compete at a T1 level but that we officially be recognized as one of the five T1 associations with the Residential Waivers Host Pilot. The result of the decision-making being done outside of our control, coupled with some misinformation being shared, has resulted in some challenges for us. However we are guided by BC Hockey expectations, regulations and policies, as is VIAHA and all other associations. These policies are clear that residential waivers are not permitted to like T1 associations, nor in fact does it make logical sense. Associations without this T1 designation are however permitted and in fact encouraged to support their young people to play at the highest level that they choose to try out for. We also support this philosophy and endeavoured to make this possible by supporting VRC as the Host T1 association in our catchment, conditional on us being granted T2 status (which has not happened).

The rules for residential transfers in the VIAHA Regulations manual are also clear: Transfers from SMHA (or VMHA) to VRC must be initiated in writing by March 31 of the first year of hockey in Atom Development. After that date and anytime after beginning 2nd year of Atom Development, player transfers must include a change of residence when moving from our association to Victoria Racquet Club. This only is applicable if we are a T2 association and is a different process than what is being suggested as a residential waiver.

We were also asked (by VRC ) to dismantle the Co-op to make it all work better for host teams in south island (JDF & VRC) by eliminating us (Victoria & Saanich Co-op) as the fifth T1 association. It is the shared view of VMHA and SMHA that more of our rep players benefit from the Co-op pilot than the previously proposed zone pilot. It is also the case that too much work had been invested in the Co-op to consider dismantling it at this late date.

The most significant changes to us only occurred in the last week when BC Hockey made their decisions on how the VIAHA Pilot would be able to function, including the addition of SMHA as an equal T1 Host association within the VIAHA Pilot. It is important to note as well that the Co-op is also a VIAHA driven initiative that was designed to create another T1 association on the island so to provide higher caliber hockey experiences and competition for all associations on the island.

This has been a frustrating process for all concerned and difficult to constantly adapt to in our messaging and booking ice times etc. There are many moving parts beyond our control that have shifted repeatedly and unpredictably, and this has put us in the spot we are now. We are wholly interested in providing the best opportunities for our membership, and can only make decisions based on what we have control over, and within the guidelines and policies that we are required to adhere to and govern us as an association.

We are committed to providing only factual information and available for any queries you may have.