hide
hide
No announcements have been posted yet for Orioles.

Our 9th Annual Clairemont Hilltoppers Texas Hold 'em Tournament on Saturday, October 6th was again a fun time had by all.

This great evening was hosted at the Best Western Seven Seas in Hotel Circle, with Hilltoppers parents, coaches, alumni, friends and neighbors spending an evening of fun, frivolity and card-playing.

Not only was this a great night of laughs and socializing, but we raised a little money for Clairemont Hilltoppers. Longtime Hilltopper Bob Faudoa walked away with the grand prize, a night's stay at the Dana Inn, along with a meal certificate.

Thanks to all who made this evening so much fun, especially our dealers Chris Cross, Troy Keltner, Jeff Dimock and Mike Boisvert. If you missed out this time, be sure to look for our next tournament in April 2013. This is a fun evening you don't want to miss!

Eleven of our Clairemont Hilltoppers Little Leaguers appeared on the KUSI morning news on Monday, April 12, helping to celebrate the start of the Padres new season.

KUSI broadcast their "Good Morning San Diego" show from Petco Park that morning, previewing the Padres home opener, and our kids got to spend the morning hanging out in the Padres dugout! KUSI reporter Kerri Sargent spent the show with the kids, interviewing them about their favorite teams and players, leading them in a "rain poncho fashion show," and generally keeping everyone entertained and informed.

Padres right fielder Will Venable and relief pitcher Heath Bell both made appearances, and were terrific with the kids... answering questions, signing autographs and posing for pictures. Expect both Venable and Bell to have some new fans at CHLL this year.

Many thanks to Kerri Sargent for offering our kids this fun opportunity, which they will remember for years to come.

If you missed the show on April 12, here is a link to one of the segments from KUSI's website: http://www.kusi.com/news/goodmorning/90669044.html 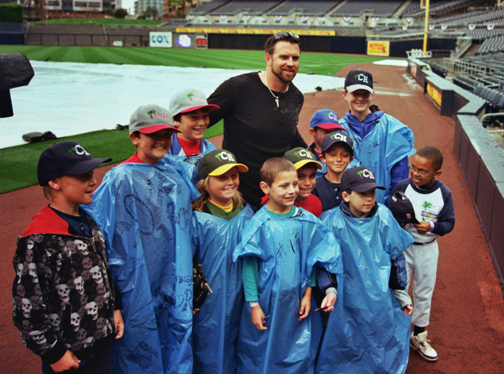 Thanks to the generosity of our District 32 Little Leagues, a team of 13- and 14-year-olds from Vilnius, Lithuania spent nine days in San Diego at the beginning of April, including two games played at our ballfield!

The team, known as Sporto Vilkai (Sports Wolves), arrived on Thursday, March 29 and spent the next week-plus fully immersed in the baseball culture of District 32. Players and coaches were housed by several host families from our league, giving both the Lithuanian players and our own 13- and 14-year-olds a tremendous opportunity to share and exchange customs of their own countries.

Those who were involved two years ago, when many of the same players came to Southern California as 11- and 12-year-olds remember the fabulous experience this exchange was for both the kids from Lithuania and everyone in our league. This year, Clairemont Hilltoppers families the Granfors, Ruthenbergs, Kifers and Browns each generously hosted players from this team.

The team played games on Saturday, March 31 and Thursday, April 5 against Juniors teams from Clairemont Hilltoppers at Cadman Park.  Additional games were hosted by the Rancho Penasquitos, Mira Mesa and Coronado leagues.

In addition to the ballgames, the kids got some great opportunities to experience the San Diego area. Many events took place during their stay, including a trip to the Padres-Royals exhibition game on Tuesday, April 3. On Friday, April 6, they traveled to Orange County, where they were to be hosted for a second week by leagues in that area for games and sightseeing.

This is the fifth time a team from Lithuania has made a springtime trip to Southern California, but only the second time for District 32 to be involved. What a great experience for our kids to see a little bit of what baseball and childhood is like in other parts of the world.

Saturday, March 5 will certainly go down as one of the most memorable days in the 60-year history of Clairemont Hilltoppers Little League.

We began bright and early with the first T-Ball games of the year, with more than sixty 4- and 5-year-olds showing off their skills for the first time. Then, it was time for our Opening Ceremony, and what a splash we made this year!

We began with a parade of all our teams, with this year's players greeted by alumni from throughout the six decades of Clairemont Hilltoppers. Soon it was time to look to the skies, as two skydivers carrying a huge American flag came streaming down to the strains of Ray Charles' America the Beautiful. We were honored to have Councilmembers Lorie Zapf and Chris Cate on hand to declare it Clairemont Hilltoppers Day in San Diego.

Members of the Padres "Pad Squad," our District Administrator Lisa LaPage, Cadman Elementary Principal Elizabeth Ballard, and staff and directors from Park & Rec also added to the special occasion. Dave Scott and the KUSI-TV morning news were there from 8-11 a.m. to capture all of the excitement, and they were joined during the ceremony by KUSI lead sports anchor Paul Rudy, who came in by helicopter with the ball for our first pitch. That pitch was thrown by our very special guest, the San Diego Famous Chicken, whose energy and personality entertained us, just like he has for millions of sports fans during the past 40 years.

After ceremonies, we enjoyed a lunch of Mike's BBQ, and watched ballgames for the rest of the afternoon, basking in beautiful weather and the knowledge that the well over 300 kids of our league had a day they will remember for a loooong time!

To see some truly memorable images of Opening Day, visit the website of ace photographer Michele Friszell at: http://www.michelefriszellphotography.com/Events/Clairemont-Hilltoppers-60th/ 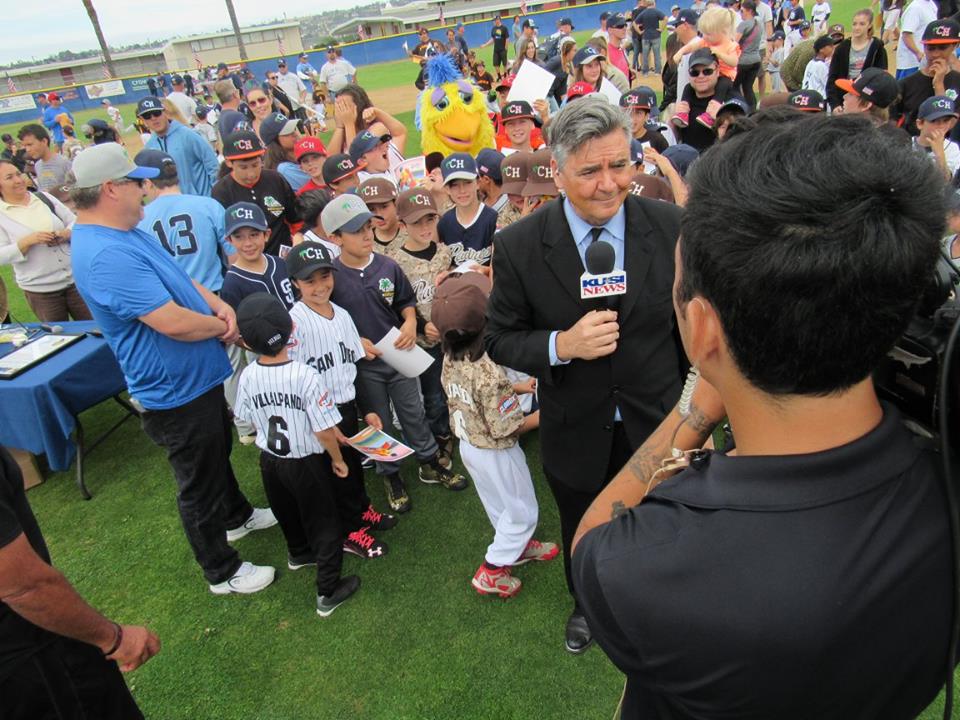 Assessments for all players ages 7-13 end this Saturday, January 19 at Cadman Park.

Tryouts begin at 9 a.m., and continue until early afternoon. A complete schedule is at the end of this article. All players in those age groups need to attend a tryout session. 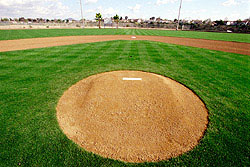