The Yankees were back in action against the Padres tonight in a make up game at Richard`s Field. The Mighty Bombers jumped out to an early lead, scoring 5 runs in the first inning only to watch the Padres come back and tie the game with 5 unanswered runs by the end of the fourth inning. Yankee pitchers: Adrei (The Big Cat ) Buado, Parker (The Real Deal) True and Kyle (The Great Santini) Santin once again pitched a magnificent game allowing 5 runs over 6innings while striking out 10 Padre batters. The Yankees also banged out 10 hits none more important than Zach(Scooter) Berry`s  fourth inning single to keep the inning alive and allowing the Boys from the Bronx to regain the lead; a lead that they wouldn`t relinguish. Other Bombers bringing the lumber were: Terrence (T-Bone) Berg 2-2; Ramon (Mad Dog) Esparza III (Player of the Game), 2-2 2,2b; The Real Deal 2-2,2b; Jake (The Snake) 1-2, 3b.

The Yankee Organization would like to throw out some much deservered graditude to Ramon (Mad Dog) Esparza III, player of the game.  Nobody brings more competitiveness to the Boys in pinstripes. Mad Dog has the instincts of Derrick Jeter, the tenacity of Pete Rose, and the grittiness of Ty Cobb all rolled up in one fur ball! 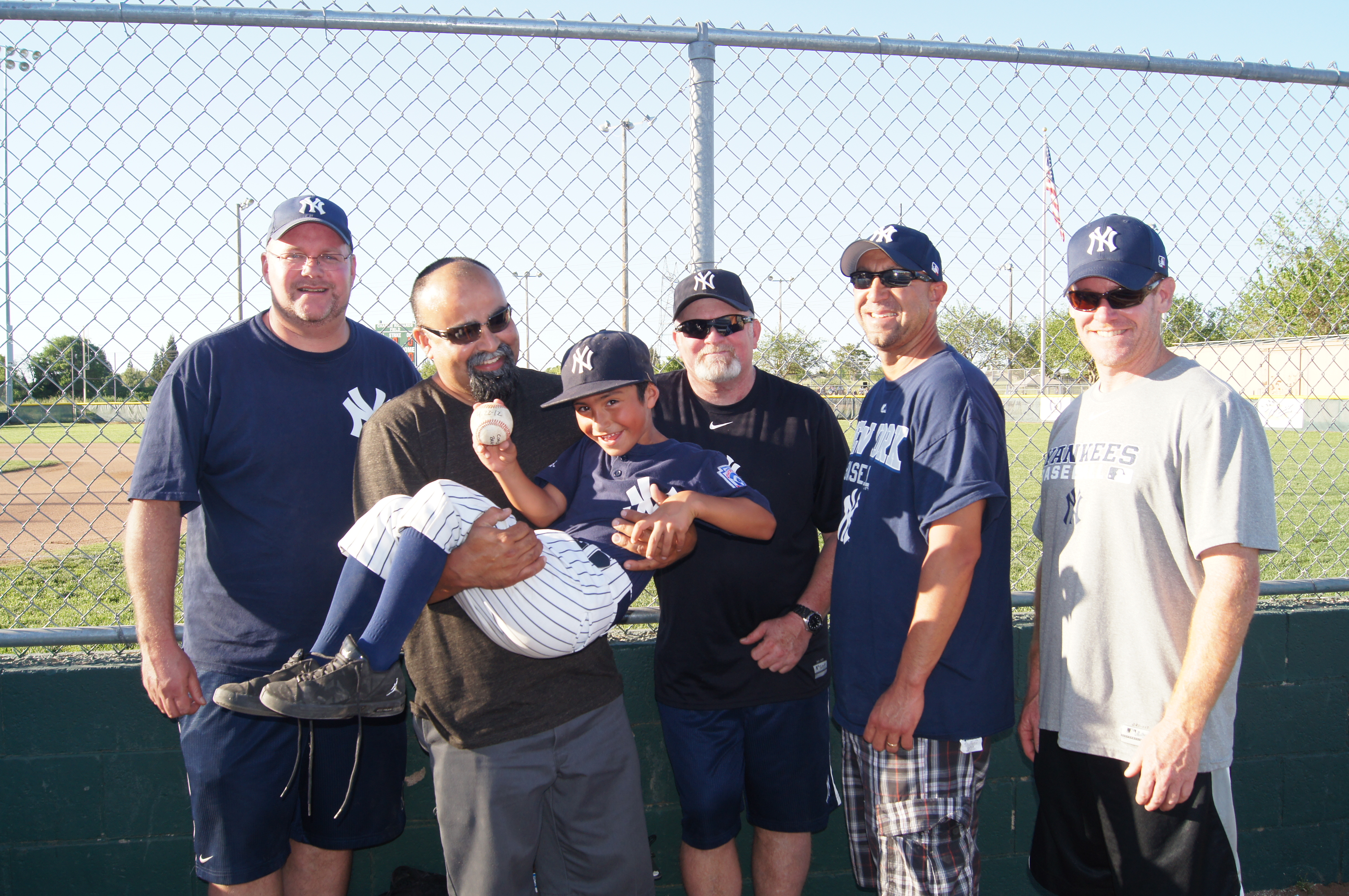 The Mighty Bombers were looking to rebound from their disappointing loss to the Inains over the weekend, and they did just that. The Yanks banged out a season high 15 hits and 15 runs as they improved their record to 5-2. Yankess Hitters:  Terrence (T-Bone) Berg 1-1;3bb, Ramon (Mad Dog) Esparza III 1-2;2bb, Parker (The Real Deal) True 2-3; Andrei (The Big Cat) Buado 2-3,2b,3b; Kyle (The Great Santini) Santin 2-3; Jake (The Snake) Peralta 3-3,2b; Zach (Scooter) Berry 1-1,2bb; Jackson (Ajax) Shedd ( Player of the Game) 1-2,bb, Nick (One Eyed Willy) Lake 2-2,bb; Spencer (The Road Runner) Floyd 2bb; Ryan (Pocket Rhino) Sancedo 2bb, Hayden (H) Mitchell,bb; all reached base safely. Having all 12 Yankees reach base in a game is the first time in franchise history! Yankee defense was spectacular and high lighted by the Mad Dog`s diving catch of a line drive in the third inning. Yankee one two punch of The Real Deal and The Great Santini got a little help from The Snake and the lefty Dynamic Duo of One eyed willy and T-Bone who closed out the game.

Yankees records improves to 5-2 with the 15-9 victory

The Yankkee Organization would like to throw out a special thanks to Jackson (Ajax)Shedd. Ajax got his nickname because he cleans up on defense playing three infield positions, plus the outfield. 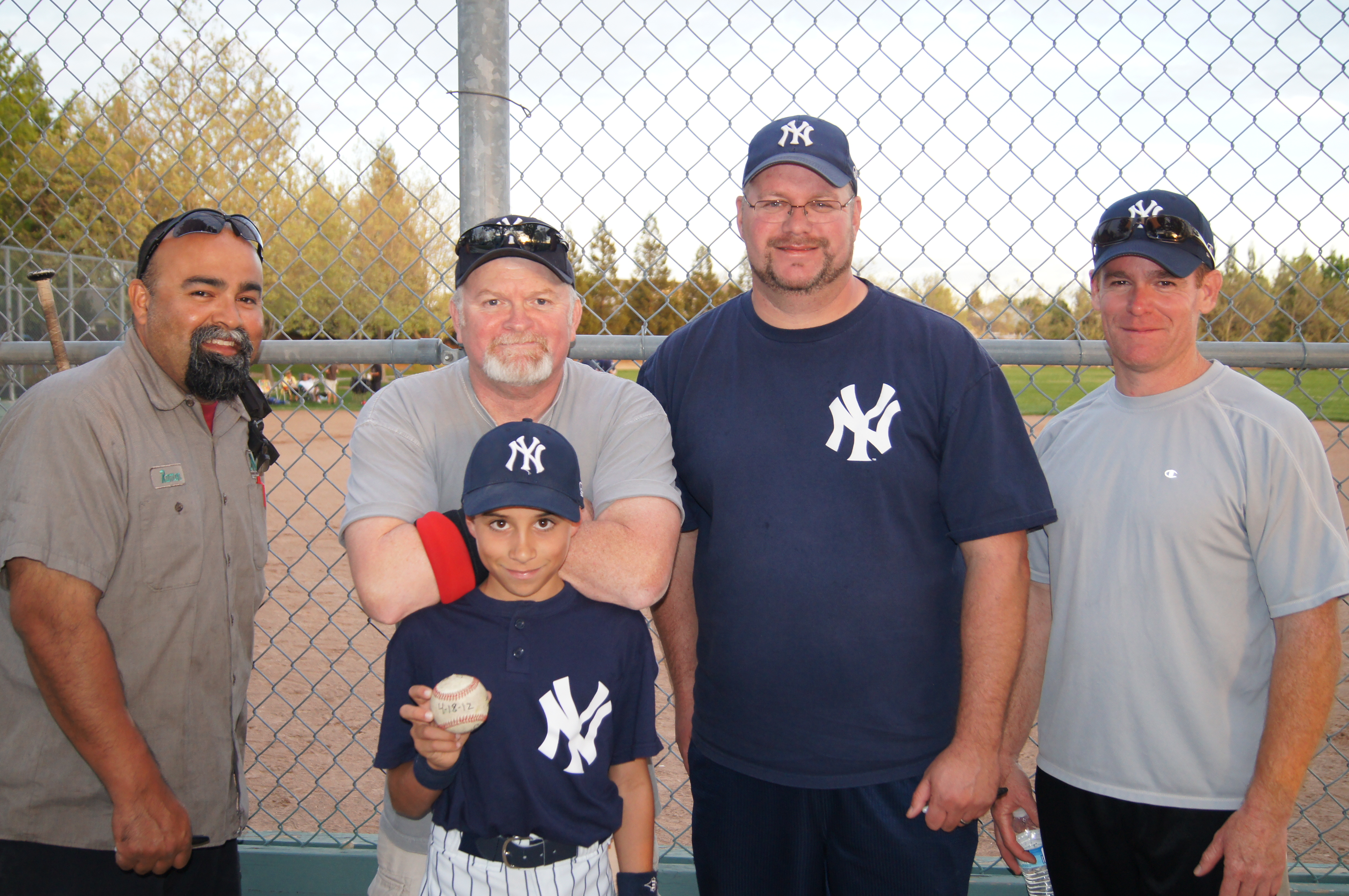 Yanks Rally but come up short

The Indians and Yankees played a make-up game today on a beautiful day for baseball at Richard`s Field. The Yankees found themselves down 8 runs early as Yankee hurler Hayden (H) Mitchell struggled to find his control. With their backs to the wall the Mighty Bombers called on fellow hurler Jake (The Snake) Peralta to right the Yankee Clipper. The Snake battled through a shakey start but found his groove and started mowing the the Tribes hitters down, like a hot knife through butter, striking out 6 batters over the next 3 innings. Being down early sent a shockwave down the bombers bats who railed out 11 hits during their comeback attempt. Yankee Captains; Parker (The Real Deal) True and Andrei (The Big Cat) Buado led the charge going 3-3 and 2-3 respectively. Other Yankee hitters contributing in the comeback attempt were; Ryan (The Pocket Rhino) Sancedo 2-2, Ramon (Mad Dog) Esparza III 1-2; Kyle (The Great Santini) Santin 1-2; Jake (The Snake) Peralta 1-2: Hayden (H) Hammer 1-3; Zach ( Scooter) Berry, 1-2; Jackson (Ajax) Shedd 1-2 and Player of the game Nick (One Eyed Willy) Lake 1-2.. The Yankees would also like to notice Spencer (The Road Runner) Floyd whos great eye for balls and strikes leads the Yankees in on base percentage with .636 and walks with 7. Terrence( T-Bone) Berg also suports a lofty on base percentage at .500.

The Yankee Organization would like to throw out a special thanks to One eyed Willy himself: Nick Lake, who always shows great effort at practice and at the games and has 2 hits in his last three at bats to prove it. Great job Nick! 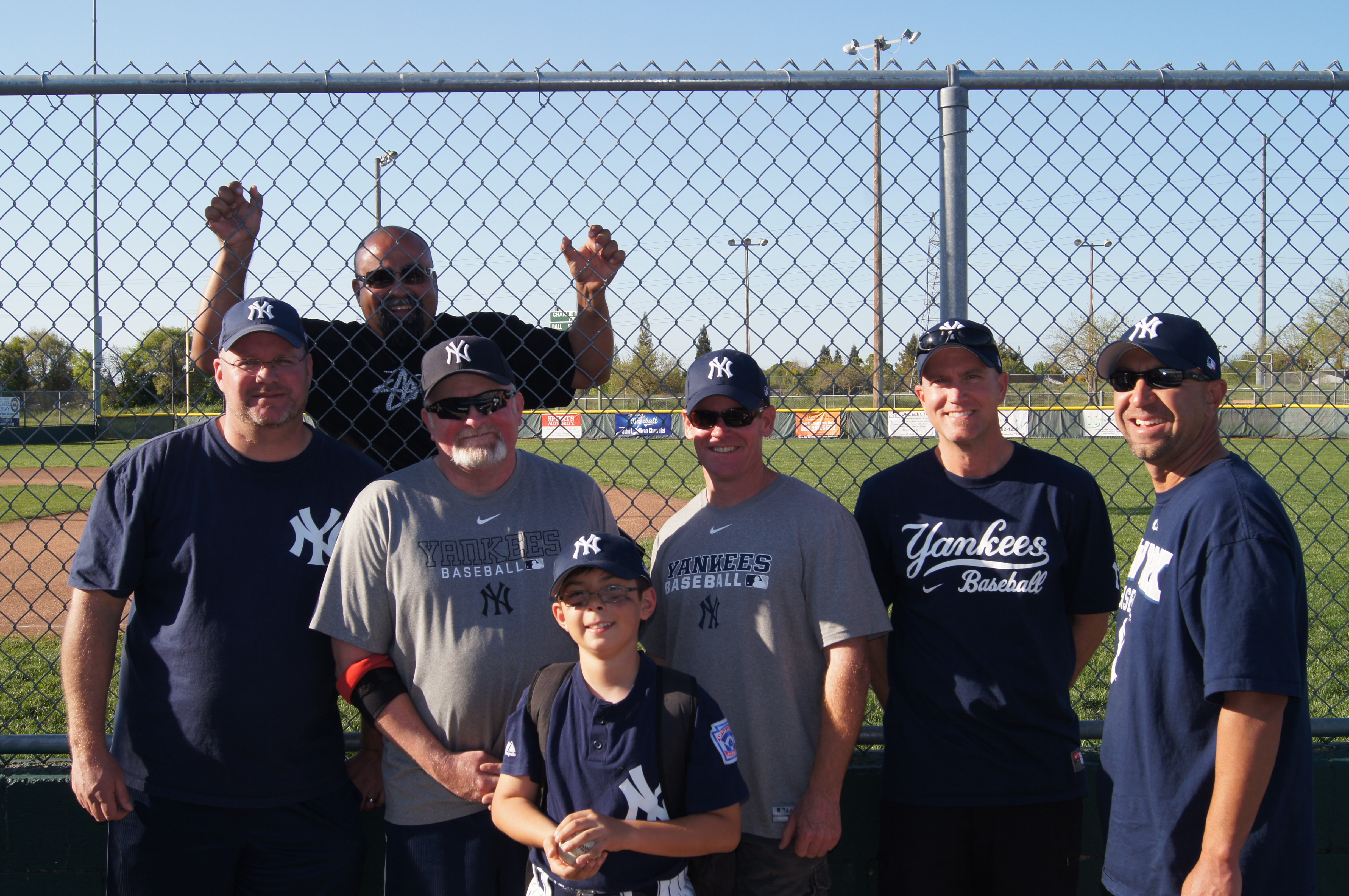 It was a beautiful day at Richard`s Field. The rains subsided and the sun peeked through the clouds as the pesky, undeated Tigers rolled into town. The first meeting of the season saw the Tigers take advantage of an unexperienced and undisciplined Yankee team. They took the Mighty Bombers to school in a 7-0 victory. Today was a different story. The Yankees knew that they would have to be clicking on all cylinders if they stood any chance of stopping the Tiger Freight Train. As always it started with the Yankees Pitchers, Kyle (The Great Santini) Santin ( Player of the Game) and Parker (The Real deal) True.  They delievered an outstanding performance holding the Tiger batters to 7 hits,while stricking out 5. The Yankee hitters also went on the attack banging out 10 hits. Nick (One Eyed Willy) led the hitting machine, getting his first hit of the season at a critical time and killing any chance for a Tiger comeback. Other Yankee hitters coming through in the clutch were:Terrene (T-Bone) Berg 1-2 ( And put on a base running clinic)! Ramon ( Mad Dog) Esparza III, 1-2; The Real Deal 1-3; Jake (TheSnake) Peralta 1-2, 2b; Zach (Scooter) Berry. 1-2; Jackson (Ajax) Shedd1-1; Andrei (The Big Cat) Buado 2-2,2b; The Great Santini 1-2. Unlike the first game when the Mighty Bombers forgot to bring their gloves to the game, the boys in pinstripes decided to play a little defense. The Tiger hitters thought they were in a monsoon of leather as the Yanks rained down a cowhide hail storm on the infield. The Yankees were led on defense by Ryan (Pocket Rhino) and Spencer ( The Roadrunner) Floyd,  their superior back up in right field help cage the cats. Other great plays on defense were made by: Mad Dog, The Snake, Hayden(H) Mitchell The Big Cat, Ajax and The GreatSantini cleaning up the game at shortstop in the final innings.

The Yankee organization would like to throw out a special thanks to: Kyle (The Great Santini) Santin (Player of the Game) Who shows that when you channel your competitve spirit you can do just about anything. 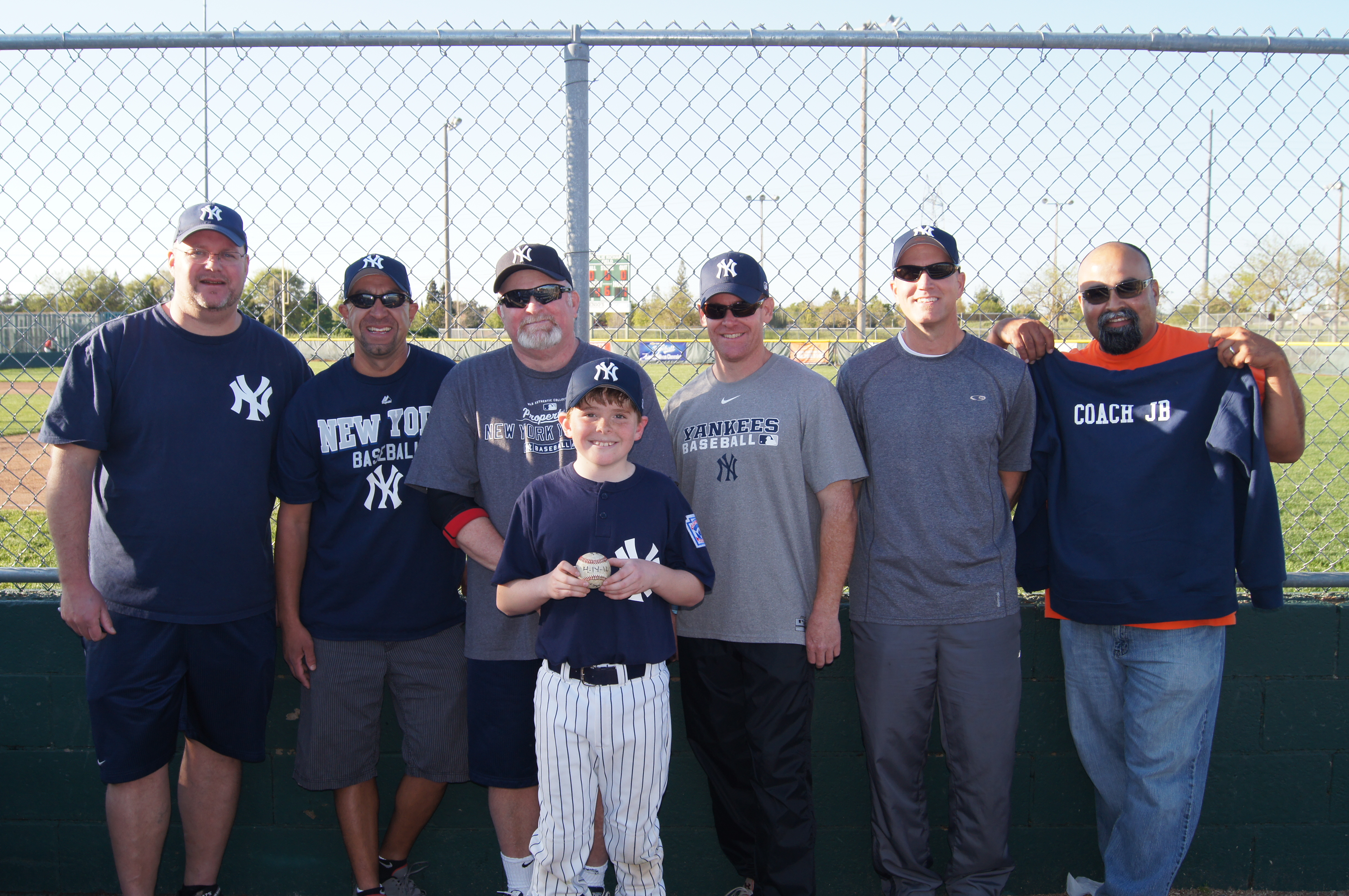 Easter weekend brings good fortune to the boys in pinstripes

With Easter weekend coming to a close the Mighty Bombers wanted just one more special gift from the Easter Bunny; A victory over a very game Cardinal team. The game quickly turned into a pitching battle, which was as advertised. Parker (The Real Deal) True and Kyle (The Great Santini) Santin were like blackjack dealers, but they were laying down strikes instead of Aces. The Yankees  managed 5 hits, one a piece by; Terrence (t-bone) Berg, Hayden (H) Mitchell 2b, Jackson (Ajax) Shedd, Adrei (The Big Cat) Buado (PLayer of the Game) and Zach (Scooter ) Berry, but the Yankees hitters also worked the Cardinal pitching staff for 7 walks, two of them came at a critical time by Spencer (The RoadRunner) Floyd and Nick (One eyed Willy) Lake. The Yankee defense played well again toinight but gave up one unearned run; 4 defensive miscues that turned a bunt into a homerun for Justin Kim and the Cardinals.

TheYankee Organization would like to throw out a special thanks to Team Captain "The Big Cat" Adrei Buado (player of the game) for his fantasic work behind the plate and being a true leader on the young Yankee team. 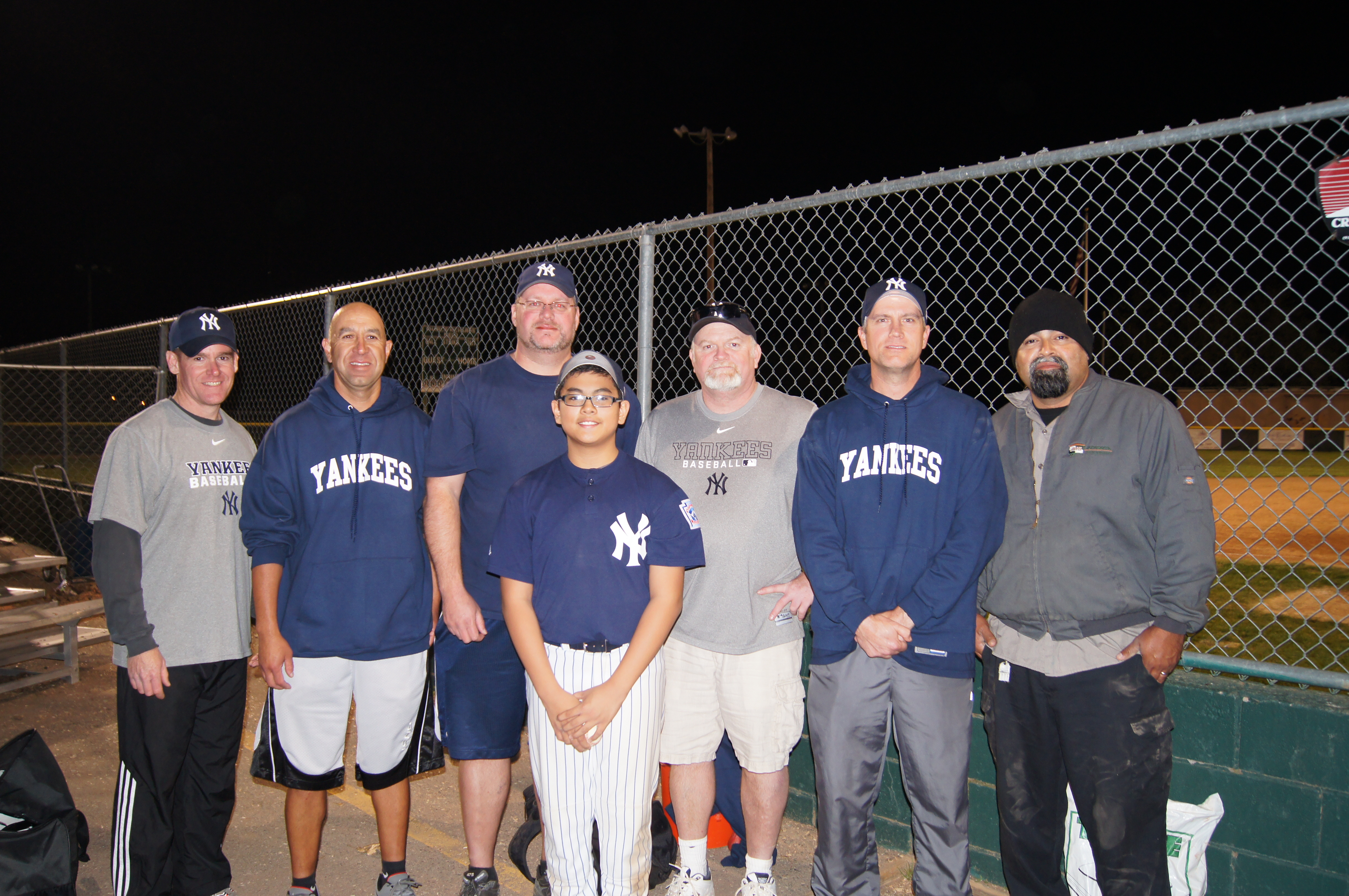