Today`s match-up at Buljan Park saw the Mighty Bombers going against a streaking Cardinal Team. The Red Birds jumped out to an early 2-0 lead and it stayed that way until the bottom of the 5th inning. The bottom half of the 5th was when the Boys in pinstripes decided to make their last stand. Spencer (The Road Runner) Floyd`s hawk like vision that gives gives him the uncanny ability to seperate stikes from balls drew his league leading 15th walk. That walk forced in Jackson (Ajax) Shedd with the go ahead run. Nick (One Eyed Willy) Lake stole home a pitch later, sealing the comeback in stone. Yankee Pitchers Adrei (The Big Cat) Buado; Parker (The Real Deal) True and the magic man himself; Kyle (The Great Santini) Santin  (game ball) did a great job of shutting the Red Birds down, allowing only one run after the first inning. Zach (Scooter) Berry kept his torrid hitting streak alive and started the House of Cards crumblization. Other Yankee hitters bringin` the lumber were: Terrence (T-Bone) Berg 1-2; The Real Deal 1-2; The Great Santini 1-2; Jake (The Snake) Peralta1-2 and One Eyed Willy 2-2.  Ramon (Mad Dog) Esparza III had a ten pitch at bat that signaled the end for the Red Bird starter. Defensive gems were turned in by; T-Bone, Scooter and Hayden (H) Mitchell.

With the victory the Bombers move to an incredible 11-2 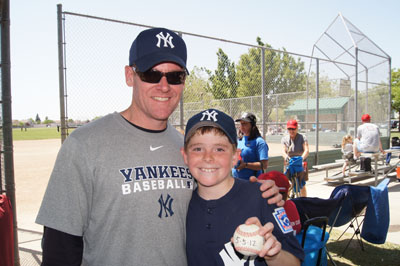 Tonight the Boys in Pinstripes faced off against the Indians, hoping to even the season series. The Yankees knew they would be in close battle squaring off with former Yankee strongman Brock (The Rock) Hearl.  Andrei (The Big Cat) Buado and Kyle (The Great Santini) Santin threw the best game of the season for the Yanks, allowing only 3 hits while strikingout 6 in a 61 pitch shutout. The Mighty Bombers continued their assault on league pitching, banging out 9 hits. The Big Cat (2-3, 2b, HR) ; ended the game with a walk off three run missle blast that sent shivers down the spine of the crowd. Other Yankee who contributed to the attack were: Ramon (Mad Dog) Esparza III 1-2; Parker (The Real Deal) True 2-3,2b; Jake (The Snake) Peralta 1-2 Zach (Scooter) Berry 2-2. Jackson (Ajax) Shedd laid down a beautiful sacrafice bunt and played stellar defense behind the plate. Hayden (H) Mitchell, Nick (One Eyed Willy) Lake, Ryan (Pocket Rhino) Sancedo and Spencer (The Road Runner) Floyd (Player of the Game) also contributed by playing outstanding defense.

The Yankee Organization would like to throw out a special thanks to the Road Runner, Spencer Floyd. The Road Runner is a leader in the club house and on the field, always working hard to get better and having a positve attitude, which rubs off on his team mates. At the start of the game The Road runner was third on the team in on base percentage with an unbelievable .636. WOW! 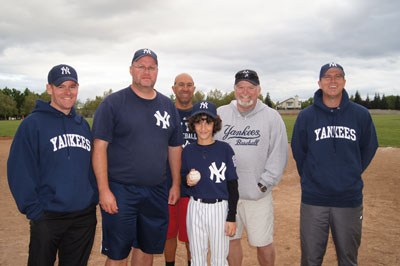 Today the Mighty Bombers faced off against a hungry Oriole team. Fantasic Oriole pitching held the Yanks in check over the first three innings allowing the Bombers only four runs.  With the game`s outcome in question the Boys in pinstripes decided to take matters in their own hands (or should I say bats). The Yankee hitters railed out 5 consecutive hits by: Jake (The Snake) Peralta 1-2; Hayden (H) Mitchell 1-2; Zach (Scooter) Berry 1-2; Jackson (Ajax) Shedd and Nick (One Eyed Willy) Lake 1-2, 2b. Willy`s double sent two Yankee runners home giving them a six run lead and put the Clippers on cruise control in the bottom half of the fourth. Adrei (The Big Cat) Buado pitched three and 2/3 innings for the win and gave way to Parker (The Real) True who got the save. Other Yankees who got into the act were; Terrence (T-bone) Berg 1-1; Ramon (Mad Dog) Esparza III 1-2; Ryan (Pocket Rhino) Sancedo, bb run scored and yes the walk master; Spencer (The Road Runner) Floyd earned his league leading 14th walk of the season and scored a run. The defensive play of the game came on a shotgun blast out of Kyle (The Great Santini) Santin`s arm as he threw a perfect stike to Ajax to gun down a runner at home plate.

With the victory The bombers move to 9-2

The Yankee organization  would like to throw out a special thanks to Yankee Veteran ; Zach (Scooter) Berry who has a great ethic and is always trying to improve his game. Zach`s hard work has paid off as he has become one of the best outfielders in the league and is sporting a lofty . 484 batting average! 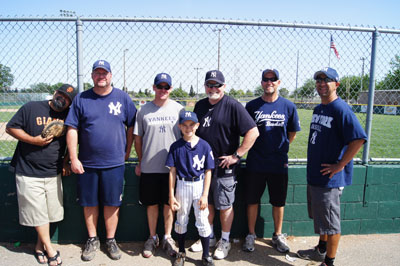 The Mighty Bombers met the Red Sox for the first time this season, and as usual it came down to one run. The Yankees jumped out to an early five run lead only to see the Red Sox come back and score 5 unanswered runs in the 4th inning. Kyle (The Great Santini) Santin pitched magically and shut down the Sox over the next two frames. Santini also added a triple and a single to ignite the Yankee Juggernaut Hitting Machine. Other top performers for the boys in pinstripes were:Terrence (T-Bone) Berg (Player of the Game), 1-3; Andrei (The Big Cat) Buado1-3; Zach (Scooter) Berry 1-3, Nick (One Eyed Willy) Lake 1-3 and Ryan (Pocket Rhino) Sancedo 1-3. Spencer (The Road Runner) Floyd added to his walk total, making it an unbelievable 13. Hayden (H) Mitchell; Ramon (Mad Dog) Esparza III and Jackson (Ajax) Shedd contributed by earning 7 walks between them. Parker (The Real Deal) True, did his part by playing some outstanding defense, and shutting down any come back attempt by the Sox.

With the victory the Yanks move to 8-2

The Yankee Organization would like to throw out a special thanks to their leadoff hitter Terrence (T-Bone) Berg Terrence realizes that there is no need to be to be hard on yourself. If things are not going your way, let it go and try again. Terrence has 7 hits and 3 walks in his last 11 at bats. Smokin` Hot! 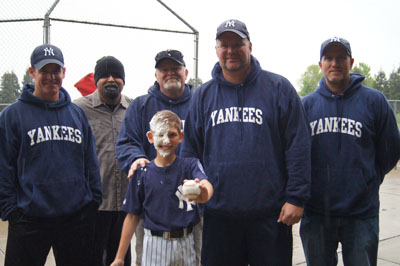 The Roseville bomb squad recieved a call last night about possible explosions being set off at Richard`s Field. After arriving, they soon realized that the loud booms were only baseballs leaving The Mighty Bombers bats. The Bombers faced off against a fierce Giant pitching staff and one of the top defensive units in the league. The Yankee hitters continued their torrid hitting attack, matching a season high, banging out 15 hits. Terrenece (T-Bone) Berg set the pace going 3-3. Blasts by; Andrei (The Big Cat) Buado 2-2,2b, Jake (The Snake) Peralta1-3, 3b and Hayden (H stands for Hammer) Mitchell (Player of the Game) 2-2; smoking line drives by: Parker (The Real Deal) True 2-2,2b; Kyle (The Great Santini) Santin 2-3; Jackson (Ajax) Shedd 1-2, Nick (One Eyed Willy) Lake 1-2; Ryan (Pocket Rhino) Sancedo 1-2 were to much for the G-men as the fell victim to the Boys in pinstripes 11-4. Spencer (The Road Runner) Floyd continued his record setting pace by recording his 11th and 12th walks of the season. Yankees Pitchers; The Real Deal and The Snake threw spectacularly holding the Giants to 4 runs, while striking out 6.

With the victory The Bombers move to 7-2

The Yankee Organization would like to throw out a special thanks to long time Yankee verteran; Hayden (H, stands for Hammer) Mitchell. Hayden proves that when you can control your emotions and have a good attitude it`s bombs away. 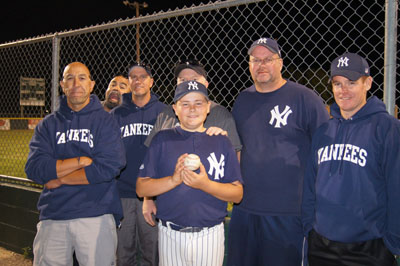