Posted by Geoff Filinuk at Jun 29, 2005 5:00PM PDT ( 0 Comments )
more editing options
Congratulations to Coach Barikian for being inducted into the SJFCA Hall of Fame at its annual banquet last night in Glassboro.  Also inducted was former Collingswood standout Henry Rossell who played basketball and football at Collingswood as well as the University of Penn.  Coach Barikian joins Skeets Irvine, Al Drulis and Dick Ridinger as Collingswood coaches who have been enshrined.

Barikian still making a difference in life of youngsters

Bob Barikian was ecstatic about being chosen to be a member of the South Jersey Football Coaches Association's Hall of Fame Class of 2005.

The coach was one of six enshrined Wednesday night at Masso's Crystal Manor.

The other new members of the Hall of Fame include coach Tom Maderia; former coach Jim Delaney of Camden Catholic and former collegiate standout Hank Rossell of Collingswood and

Also, Gary Brackett, a Glassboro graduate and member of the Indianapolis Colts, and Brysen Manor, a graduate who went on to star at and was an All-Pro with the Denver Broncos as a defensive tackle, were inducted.

"What makes this honor so special to me is just looking at the names of the people in the Hall of Fame and all the things they've done for the game and the kids," Barikian said. "It's not just coaches, it's everybody . . . players, reporters, contributors, equipment managers . . .

"The list goes on. That's what makes it so special, everyone being recognized."

Barikian, a 1969 Sterling graduate, has no plans of getting out of coaching.

"I'm still having fun," he said. "When it's not fun, then I'll get out. Watching kids grow keeps you young.

"Football can make a big difference in a kid's life. It gives him a chance to interact, learn to work together and, if the kid sacrifices, there's a lesson of life to be learned in football. That's another thing I enjoy being a part of."

Like every coach, Barikian has memories of a couple games that will live forever in his mind.

"In 1989, we lost to a very good Larry Ginsburg-coached Woodbury team 21-20 when we had a 40-yard field goal attempt go just wide at the end," Barikian recollected. "Two years later, back at Woodbury, we beat them 14-0 to end their long winning streak. I'll never forget those games.

"The Collingswood-Woodbury game is still The Big Game to the alumni members of both schools."

The inductees are scheduled to be introduced at the 15th annual Adam Taliaferro Football Classic at tonight.

The game will kickoff at .

The Blue team is made up of schools from the and Cape-Atlantic leagues to go with the Lenape District schools.

The White team is represented by personnel from the Olympic, Tri-County and Colonial conferences.

Posted by Geoff Filinuk at Nov 7, 2004 4:00PM PST ( 0 Comments )
more editing options
Congratulations to Coach Barikian for earning his 100th career win at Collingswood in a 46-18 win over Haddon Heights on Friday night. Kevin Callahan: Collingswood's Barikian more than a winner Saturday, November 6, 2004 COLLINGSWOOD - After standing on the opposite sidelines and absorbing almost a half a hundred points being scored on him, Brian Clark still held nothing but a wholesome good feeling toward his former coach. Which tells you how well-liked and respected Bob Barikian is. Clark, an assistant coach with Haddon Heights, walked across the field he once played on for Barikian while a senior captain in 1995 to congratulate his old coach Friday night. And, although the scoreboard read Collingswood 46, Haddon Heights 18, Clark was able to quickly dismiss the bad taste of the loss and couldn't say enough good things about Barikian, who collected his 100th career victory. "He is a great guy, it is well-deserved," Clark, a former defensive tackle and center for Collingswood, said. "He is a great mentor, he is a great person, he is just great to be around." It really seemed fitting that on the sidelines where the legendary Skeets Irvine once patrolled in winning 223 career games - second best in South Jersey history behind Delsea's John Oberg (230 wins) - Barikian became just the 44th coach in South Jersey to hit the century mark. Just as meaningful, perhaps, is that so many of his former players were on the sideline coaching too. Besides Clark, Heights assistant Tim George also played for Barikian while current Collingswood assistant coaches Mike McKoewn and Rick Pentz once wore the Blue and Gold. Really, a higher compliment can't be paid than a player wanting to give back and coach because of his former coach. "He is why I'm coaching," McKoewn, a senior quarterback in 1997 for the Panthers, said after the Colonial Conference win. "He is the greatest guy I ever met. He cares a lot for the kids. I'm happy to be a part of this." In case you couldn't tell, Barikian has been such an inspiration to McKoewn that the young assistant is an unpaid volunteer. "I remember making my first start against Haddonfield my sophomore year and he told me we were opening up with an option run and I went 78 yards for a touchdown," McKoewn recalled while walking off the field. "He showed he had faith in me and I loved him every since." Barikian joins a legendary list of just 15 active area coaches in this elite club with Washington Township's Tom Brown, Florence's Joe Frappolli, St. Joseph's Paul Sacco, Paulsboro's Glenn Howard, Kingsway's Tony Barchuck, Sterling's Jim Gallagher, Gloucester's Leon Harris, Shawnee's Tim Gushue, Hammonton's Pete Lancetta, Clearview's Dan Pidcock, Mainland's Bob Coffey, West Deptford's Clyde Folsom, Palmyra's Ty Belford, Burlington City's Tim Reardon and Burlington Township's Tom Maderia, who also reached the milestone this season. But, wins alone can't measure what Barikian has meant to Collingswood in his 21 seasons. "I see the tradition and pride he puts into this school and the program, it is the loyalty he puts in," Pentz, a center/defensive end on the 1989 team, said about his former coach. "He could've put that loyalty into Sterling where his kids went." Barikian, 53, is a graduate of Sterling. He came to Collingswood in 1980 after six seasons at Pitman as an assistant coach. In the last two decades, Barikian has been much more than a good football coach. "Bob is a great guy, he is the senior class advisor, he is an advisor for the senior trip, he handles all the graduation activities and he is the president of the Collingswood Education Association," Collingswood principal Chuck Earling said. "He is so totally involved in the kids lives." Barikian, a special education teacher for 30 years, did enjoy the 100th win as the Panthers improved to 5-3. He wasn't one of those coaches who just said it was another win. "It was nice, it is special," Barikian said afterwards in the bowels of the Collingswood gym. "It took a lot of people to get here." One of those people was Collingswood junior running back Jon Dempsey, who scored three touchdowns against Haddon Heights (1-7). However, Dempsey felt playing such a huge role in Barikian's memorable win was the least he could do for his coach. "My mom died this summer and Coach came to the funeral," said Dempsey, who added that he didn't know Barikian knew his mother, Shirley, had died. "He is like another dad to me - on and off the field." Barikian has been more than a football coach to a lot of guys for a lot of years at Collingswood. For that he can never be fully repaid or thanked. And, while being so many things to so many people, Barikian has never swayed from maybe the most meaningful reason of all for coaching. "I really enjoyed playing football for him," Clark said.
cancel

Colls improve to 2-1 with win over Gateway 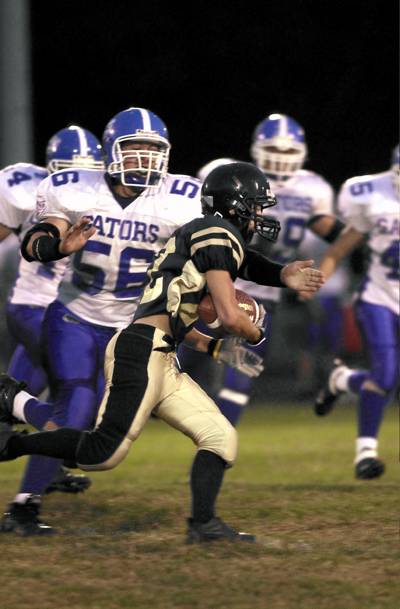 It's only the third week of the South Jersey football season, but it's not too early to start thinking about the NJSIAA playoffs.

With that in mind, Gateway and host Collingswood have a key matchup Friday night. Both teams are 1-1 and coming off impressive victories - Gateway defeated Haddon Heights, 27-7, while Collingswood rallied past Haddonfield, 12-7.

The winner will have playoff hopes dancing in its players' heads. In football, Gateway is in Group 1 (though the school is listed in the Group 2 bracket in most other sports), while Collingswood is in Group 2.

The early line in Group 2 is this: Mail the championship trophy to West Deptford. The rest of the eight-team field, however, is up for grabs.

Group 1 is wide open, with Schalick, Glassboro, Salem, Paulsboro and Woodbury looking like the first tier, and teams such as Gateway, Gloucester, Lindenwold, Riverside and Woodstown in the mix.

Groups 1 and 2 don't have a lot of dominating teams, so it wouldn't be surprising if some teams with .500 records sneak into the playoffs. Eight teams qualify in each section, and only a team's first eight games count toward the qualifying.

Hence, the winner of Friday's Gateway-Collingswood matchup will take an important step. Gateway has not qualified for the postseason since 1984. Collingswood has qualified just once in the last nine seasons, in 2000.

Gateway's offense has benefited from the addition of senior quarterback Mike Flacco, a transfer from Camden Catholic. Last week, Flacco directed the Kevin Leamy-led attack and contributed 56 yards on five carries. Leamy, who likely would have played quarterback if Flacco didn't transfer, gained 202 yards on 26 carries and scored four touchdowns.

"Our goal," Gateway coach Mark Deal said, "is to qualify for the playoffs."

That's a refrain being uttered by numerous small-school coaches.