Posted by Geoff Filinuk at Nov 22, 2005 4:00PM PST ( 0 Comments )
more editing options
Congratulations to the Collingswood football team for earning its share of the Liberty Division title in a 7-6 win at Sterling on Wednesday night.  A special thanks to all the seniors for their hard work and dedication to the team over the last four years.  Good luck in your future endeavors.

COLONIAL CONFERENCE CHAMPS!  I like the sound of that. 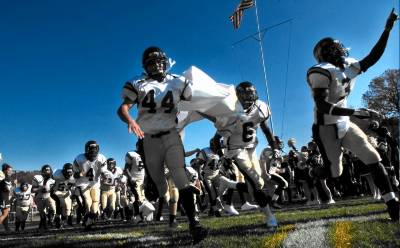 Running through the heart of each city is Haddon Avenue, connecting and nurturing both Camden and Collingswood like an umbilical cord.

This proud pathway overflowing with traffic and history, however, isn't the only uniting force between these old South Jersey towns.

High school football also connects Camden and Collingswood. Back before World War I started and a few years before the Vietnam War ended, the annual Camden-Collingswood football game was as big as it got.

Frambes not only remembered that the game ended Collingswood's 28-game winning streak, but he also recalled "the police on foot, motorcycle and horseback trying to keep the immense crowd off the playing field."

Frambes, who wrote books titled A History of South Jersey Football and Hail Panthers -- Here They Come (a history of Collingswood football), wrote that "no artificial stimulation was ever needed to arouse the passions for the Camden-Collingswood game. That was because often unbeaten seasons and championships were on the line when the Purple Avalanche (Camden's old nickname) played the Panthers of Collingswood."

Now, of course, Camden goes by the nickname Panthers, too. Indeed, more than Haddon Avenue connect these two great towns and schools. Back in action

And, once again, these two great schools, which supplied so much history and glory to South Jersey football -- the Brooks-Irvine Football Club is named after former Camden athletic director Phil Brooks and former Collingswood coach Skeets Irvine -- will play as sixth-seeded Camden faces seventh-seeded Collingswood Saturday in the South Jersey Group 2 semifinals.

"Win or lose, our toughest game was Camden each year," said Joe Jones, a Collingswood All-South Jersey lineman in the early 1940s.

Added Ralph Herman, an All-South Jersey running back for Camden in the early '40s: "The Camden-Collingswood game was really big. It was always so big." Big game

The game was not only big for the players, but for both communities.

"The whole city of Camden and Collingswood would be talking about going to the game," Herman said.

Wrote Frambes: "The biggest night of all preceded the Camden game. For weeks, the kids and young adults would plan the festivities that always became known as "the night before the Camden game.'

"The timing was perfect. The game was always scheduled for late October, the time of Halloween and Mischief Night. Great crowds would gather in the two communities and march upon each other, usually meeting in the vicinity of the White Horse Pike and Haddon Avenue.

"Always, some intrepid driver would tool his vehicle through the rival community and at some opportune moment his passengers would shout "Beat Camden (or Collingswood). This taunt would be answered with a volley of rotten fruit and vegetables."

Norm Task, 79, recalled his cousin Al Task had a fruit stand on the Collingswood side of Haddon Avenue and would "take the fruit that wasn't good before the Camden game and put it aside.

"To me that was exciting," said Norm Task, who lives in Haddon Heights. "I was a little kid throwing tomatoes."

If it sounds like a different era back then when the Camden-Collingswood game was bigger than the Eagles-Giants, well, it was.

"The game was big," said George Pims, Collingswood's All-South Jersey quarterback in the early '40s. "There was no TV to disturb you. All you had was football." Through the years

In 1909, Haddon Avenue became a toll-free road when Camden County purchased the Haddonfield-Camden Turnpike for $12,840.

The following year, in its second year as a school, Collingswood started a football team. Just three years later, the first great Camden-Collingswood game took place when, according to Frambes, "an inspired Collingswood team fought mighty Camden to a 13-13 standoff."

Three decades later, Frambes wrote that "a mammoth crowd of 13,000 gathered at Shields Stadium, while those who were locked out found vantage points in trees and old rooftops. Collingswood knocked Camden from the unbeatens with a 13-0 win in 1935 and went on to win the Group 4 title."

The following year at Farnham Park, Camden defeated the Collingswood 2-0 when Dick Ward blocked a punt in the end zone. Collingswood went on to win another championship.

In the 1942 game, Pims threw a touchdown pass in a 7-6 win, but had his nose broken and both eyes blackened and lost a tooth and a half on the play.

"My mom cried for a week," Pims recalled, punctuating how hard these games were played in this rivalry.

In 1948, the 35th anniversary of when the rivalry began, neither Camden nor Collingswood "entertained serious title hopes but a crowd of 7,500 still came out to Shields Stadium to see a 7-7 tie."

Collingswood capped the 1958 season with its first Group 4 title since 1949. But one of its toughest games -- a 14-0 win -- was against Camden, which honored the Silver Anniversary of its unbeaten 1933 team that beat Collingswood.

It was the first football game a young Frambes ever saw.

"It was the social event of the week," Frambes said recently about the Camden-Collingswood series.

A few years later, this great series that began when a touchdown was worth five points and before the forward pass ended in 1965 with Collingswood posting a 28-0 win. Memories, memories

The fabled series and innocent days of throwing rotten fruit at each other might be long gone, but the memories live on.

"I told him I was Pimsy. He couldn't believe it. That was 60 years ago." Reach Kevin Callahan at kcallahan@courierpostonline.com 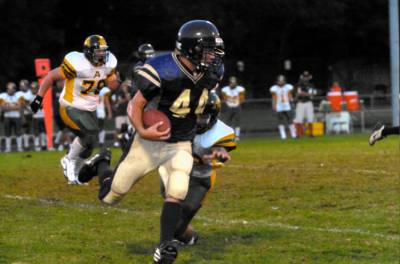 They're the immovable objects

They're the immovable objects

According to Collingswood head football coach Bob Barikian, that concept is the primary reason the Panthers' veteran linebacking quartet has jelled into a cohesive, ball-hawking unit.

It also helps explain why Collingswood's defense has not been scored on through three games this season.

"They're all three-year starters, they've all worked hard in the weight room and they're all great leaders," Barikian said. "But the most telling factor is that they're content with being a great group. There's not one guy out there playing for himself."

There's no secret to the success of Paulsboro (3-0). DeAndre Fowlkes opened the season by rushing for a career-best 226 yards and four touchdowns against Woodbury, and the 5-11, 175-pound senior has amassed 406 yards and six touchdowns on the ground.

Williams didn't hesitate when he was asked for the key to defeating the Red Raiders.

"We've got to keep Fowlkes from getting outside," he said.

Described by Barikian as an Ivy League-type of student and athlete, Williams carries a 3.4 grade point average and is both gracious and generous in his assessment of his teammates and the Collingswood staff.

Williams credited defensive coaches Jack McConnell and Mike Anderson for their thorough preparation, and he took turns talking up the attributes of his linebacking brethren.

"We're real close and we knew we were good" coming into the season, Williams said. "But the Audubon game was a real confidence-builder for the entire team."

In the season opener on Sept. 9 against the Green Wave, Collingswood pitched a shutout into overtime as Robinson recorded six sacks and Williams and Dempsey combined for 13 tackles. The Panthers won, 6-0, on Dempsey's 3-yard run in the extra period.

"We were real proud of ourselves because we were able to pick up our offense," Williams said. "We knew we'd eventually move the ball and score, so we just took it upon ourselves to keep [Audubon] out of the end zone."

Collingswood improved to 2-0 with a 28-7 victory at Gateway on Sept. 16, with the Gators' lone score coming on an interception return. Last Friday night, the Panthers shut the door again in a 43-0 romp over Lindenwold, including a stand by Collingswood's defensive reserves.

"I think Lindenwold had a first and goal at our 5 and our second-team defense kept them out of the end zone," Williams said. "Our whole team is really proud of that shutout, because it showed that even when our starters aren't in the game, we don't let up."

According to Barikian, the performance of his linebackers has allowed other players to shine as well. Sophomore defensive tackle Seth Payne (5-11, 240) has come on to anchor an inexperienced line, and junior safety Brian Dillard enjoyed a career game against Lindenwold - intercepting two passes, recovering a fumble and scoring three touchdowns.

"They're always a great team, always well-coached," he continued. "And knowing our kids, if somebody scores on us, they'll just regroup and go out and start [the shutout string] again."