hide
hide
No announcements have been posted yet for South Texas Walking Club.

Posted by Adrian Jaime at May 4, 2019 5:00PM PDT ( 0 Comments )
more editing options
CONGRATULATIONS!!! YOU HAVE REACHED THE HOME OF THE FIGHTING TURTLES.

This site will provide you with information about the South Texas Walking Club, one of the biggest and best racewalking teams in the United States.


Check out our links page to find more information about racewalking! 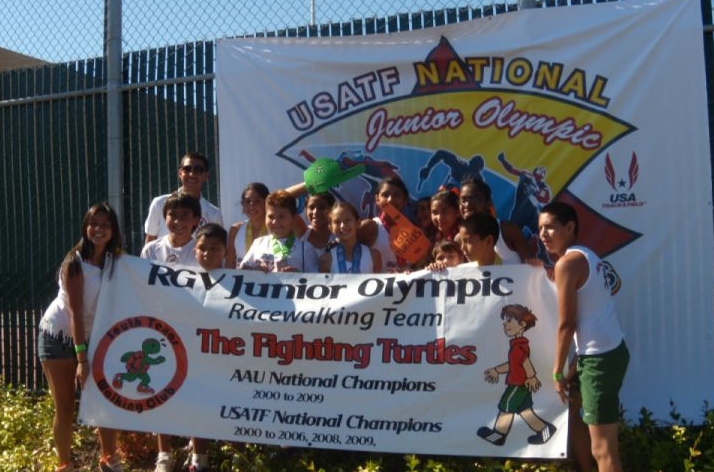 We thought that our USATF Junior Olympic Competition had been tough, having won it by only seven points, but we never dreamed of what awaited for us in Norfolk Virginia at the AAU Junior Olympic Championship.

From the reception we received, it is now apparent that our combined efforts to promote race walking at the grass roots level is beginning to pay off.  We were elated when we found out there were over one hundred teams with race walkers in attendance and surprisingly, it seemed as thou everyone and their grandmother came to participate.

Newport News Virginia and Fort Meade Maryland had brought the greatest number of race walkers with ten and eight respectively.  We, on the other hand, had fourteen athletes that had qualified after having dismissed four members during the year.  Of the fourteen qualifiers, four could not make the trip, two got stranded on the road with their parents, one never left Pharr due to personal problems and Johan, our USATF Junior Olympic silver medalist, left for Europe immediately after said race, leaving us with only six members to defend our national championship title.

Carolina Hernandez (11) of the South Texas Walking Club felt overwhelmed without her other teammates in attendance.  She, however, gave our club a boast as she provided us the only eight points of the day with her gold medal.

The second day started just as bad for the South Texas Walking Club as Newport News 14 year olds Jayla Riddick and Diamond Sellers took 4th place in their respective walks.  However, the turtles earned a gold medal from Emely Antuna (14) followed with a silver medal by Julisa Juarez (15) bringing the turtle’s score up to 23 compared to 41 for Newport News and 43 for Fort Meade.

The tables turned after these races as Newport News and Fort Meade managed only one more athlete on the award stand while the turtles last two races were magnificent.  The 15-16 year old boys race saw a repeat of the USATF three top finishers, Jordan of Georgia (15) and Jonathan (15) and Eduardo (16) of the turtle team.  Jordan once again took the lead at the beginning of the race with Jonathan taking over at the end of the second lap.  Eduardo rode their shirt tails just long enough to convince himself that he had had enough from the two fifteen year olds.  He too soon went around Jordan and while it took him a little longer to go around Jonathan, he nevertheless picked up the pace around the 4th lap and Jonathan could not respond loosing the lead to Eduardo who never looked back.  The boys reversed their finish line positions from their USATF meet, Eduardo finishing in a personal best time of 14:50.47, Jonathan in 15:06.90 and Jordan in 15:11.02.  This brought the total points earned by the turtles to 38 compared to 45 each for Newport News and Fort Meade after Kenneth Valentine finished in 5th place for Newport News and Jose Alfonso Silva finished in 7th place for Fort Meade in the same race.

There were only two more races left and neither Newport News nor Fort Meade had anyone to put on the starting line.  This placed a lot of pressure on the only turtle, Amberly Melendez (17), left to race walk knowing that it would take a 1st place finish for the team to again win the championship title.

Amberly took off at the sound of the gun but like every other turtle, she was well behind the leader at the end of the first lap.  She had outpaced the 2013 record winning girl Brenda McCollum in 2014 with a time of 15:24.21, but could she stand the heat today.  The National Weather Service heat index was at the extreme caution level as the race started at 3:30 p.m.  However, she still felt ready and soon went around the leader covering her second lap in 1:56 causing her coach to ask her where the fire was since that was a little too fast and too early.

Soon the announcer started reporting that Amberly had an opportunity of breaking the 2013 record of 15:11.04 as she started lapping many of her competitors.  The audience started chanting “Go Amberly Go” which no doubt helped Amberly break the old record by seventeen seconds as she crossed the finish line in a time of 14:54.64, and, exhausted fell flat on her face.  She soon got up and started providing water to her competitors as is customary for her when they cross the finish line not yet realizing that she had helped her team win another national championship title, even if it was by only one point. 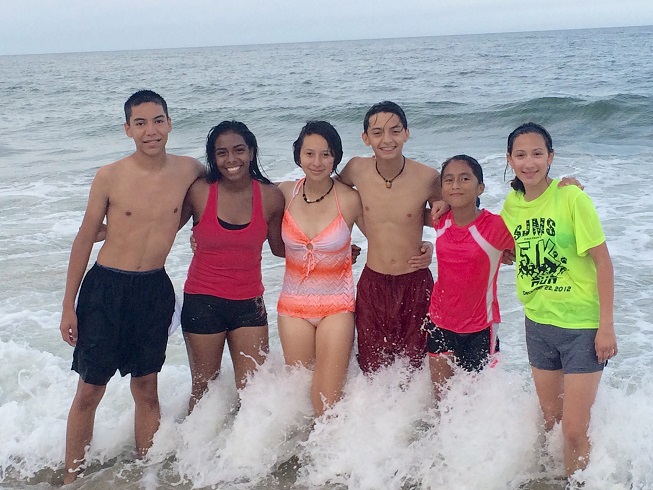 Posted by Adrian Jaime at Sep 29, 2015 5:00PM PDT ( 0 Comments )
more editing options
National Champions Our South Texas Walking Club Turtles had been the top race walking Junior Olympic team in the U.S. for many years but the Illinois Sharks came to the Junior Olympic National Championship in Jacksonville Florida ready to claim that honor. The Sharks brought nine of their team members to the JO’s. The Turtles began the year with seventeen but dismissed four of their members during the year and another four could not afford the trip and thus started the trip with the same number as did the Sharks, nine. Unfortunately for the Turtles, the parents of two of their nine athletes had auto problems on the way to Jacksonville and never made it to the stadium. The odds were now in favor of the Sharks. The Turtles took an early ten point lead on the first day with Emely Antuna and Johan Espinosa taking 4th and 2nd place respectively while Shark member Betsy Rodriguez took 7th place in the 13-14 year age bracket. The Turtle lead was short lived as the Sharks 9-10 year olds Heather and Hannah Durrant crossed their finish line in 4th and 6th place respectively for ten points giving the teams a new start at 12 points each. The Sharks then went on and finished the first day with an eight point lead as 9-10 year olds Frida Quiñones and Brisa De La Torre added nine points with their 3rd & 6th place finish, out pacing Turtle member Carolina Hernandez who finished in 8th place. The second day started with Turtle 15-16 year old member Julisa Juarez earning one point with her 8th place finish bringing the Sharks lead down to seven points. Turtle club member Amberly Melendez and Shark club member Nayeli Cisneros started off the next race together in their 17-18 year age group but Amberly soon took off after the predicted winner, Ashleigh Resch of Ohio. Amberly walked a superb race finishing in 2nd place in a personal best time of 14:58 while Nayeli finished in 3rd place reducing the Sharks lead down to six points. The Sharks were now confident of winning the championship as their top 15-16 year old Angelo Peters stood at the starting line on the next race. Vince Peters, our former national race walk chairman, had predicted that he would win this race but did give Eddy and Jonathan of the Turtle team an outside chance of an upset. This race turned out to be one of the most contested races of the day as the lead exchanged several times from Jordan Crawford (of Georgia) to Angelo, to Eddy, to Jonathan and finally to Jordan again. Jordan led most of the time and as Angelo tried to once again take the lead he fell prey to the judges 200 meters from the finish line as he was pulled out for, reportedly, a bent knee infraction. Jordan went on to win, but most importantly, Jonathan and Eddy finishing in 2nd and 3rd place respectively for thirteen points giving the Turtles yet another national championship. 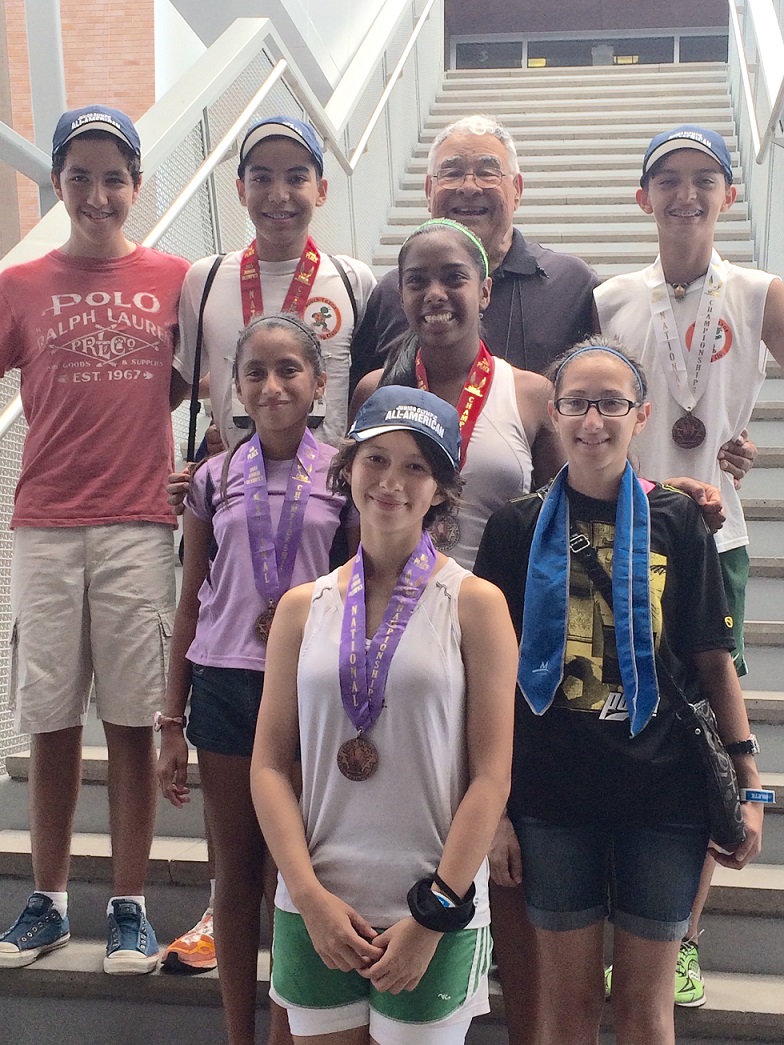 “Coach Jaime, please provide me with the name and telephone number of Jonathan Aguilar’s parents,” wrote the North Carolina University head coach two years ago to Coach Jaime.  He had just seen Jonathan participate and earn high school All-American honors at the New Balance High School One Mile National Championship in North Carolina and thought Jonathan was a high school senior.  He was shocked to find out Jonathan, who is big for his age, was then only a sixth grader.

Jonathan has been walking at a faster pace than most other boys did at his age and he is now only an eighth grader at Alamo Middle School.  His step father, USATF Association Race Walk official Juan Flores, is very proud of Jonathan and supports him in all his endeavors.

Being supportive of other young walkers joining the team has always been a priority for Jonathan.  He seldom misses any practice sessions and maintains good grades in school as mandated by the South Texas Walking Club Board.

Jonathan has qualified to attend the prestigious USATF Texas Winter Race Walking December Camp being held in Pharr for the eighth consecutive year.  He, along with team members Amberly Melendez, Matias Serna, Julisa Juarez, Gisela Flores, Emely Antuna and hopefully other members that will soon qualify, will be participating with other top elite race walkers including the USA team members that will be representing the USA at the upcoming USA-Canada meet, the Pan American Cup in Canada and the World Championship in China.

The South Texas Walking Club is proud to have so many of its members qualify to attend this camp in Pharr headed by USA Olympian Tim Seaman and his wife, Canadian Olympian Rachael Seaman.  Camp attendance is limited to the top forty elite USA junior & college girls & boys plus ten of the top elite junior race walkers south of the border for a total of fifty that will receive eight days of intensive training. 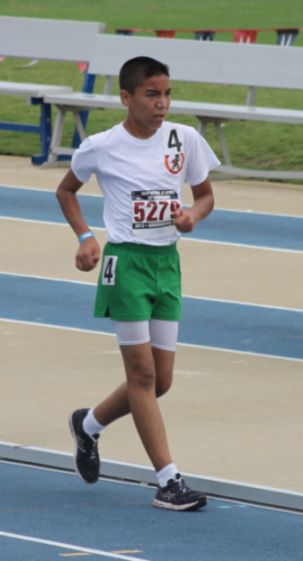