Posted by Michael Glick at Mar 12, 2016 4:00PM PST ( 0 Comments )
more editing options
New Town guts out resilient win over Gwynn Park in 2A semifinals March 12, 2016 ?Kyle McFadden ?HS Basketball ?0 COLLEGE PARK — Competitive nature. It’s the engine behind every successful team, no matter how big or small, college bound or a high school one-and-done. Mike Daniel knows such fieriness wakes himself up, and his New Town Titans out of bed each and every morning preparing for battle on the hardwood war-zone, whether in practice or a live game. “It’s just like being in the gym,” Daniel, the head coach, said. “Gym is war when we go at each other, it’s war.” Mental toughness and a hard-nosed demeanor has carried the Titans through many down-to-wire games, boasting an almost squeaky clean record in single-digit contests. The Class 2A semifinal on Friday night, in what was billed the game of the tournament, was just another war New Town has experienced countless of times this year. They gutted out a 65-58 victory over Gwynn Park with a resilient mindset to launch them into the state championship game against Middletown on Saturday. Their single digit ball game record improves to an impressive 11-1. “They never say die,” Daniel said. “They never say, ‘We’re done’. We play until the very last second of every game.” With under three minutes to go, New Town commanded a 14 point lead and appeared to coast into their second straight finals appearance. A little over two minutes later, and with 40.6 seconds remaining, Gwynn Park was on the verge of pulling off the improbable — wiping a 14 point deficit to just one off a Marlon White 3-pointer, two Aaron Parker free throws and layups from Isaiah Miles and Kollin Mitchell. New Town then took a deep breathe and remembered, this wasn’t their first rodeo. “We all have been here before,” senior center, Chris Fitzgerald said, who finished with 14 points, seven rebounds and four blocks. “We stay together and we know what we have to do.” Free throws from Devin Smith (14 points, six rebounds and five assists), Deonte Hicks (14 points) and Fitzgerald preserved the Titans chances at repeating for a state crown. “Anytime my guys step to the line, I feel comfortable,” Daniel said. “They’ve been doing it all year.” Eight lead chances occurred in the first half. New Town trailed only once in the final 16 minutes. Gwynn Park, who is known for their blistering speed, but not for towering height, were overwhelmed the majority of the contest by New Town’s abundancey of length around the rim. “I definitely think our size had a huge factor,” the 6-foot-7 Fitzgerald said. Up next for New Town is a game they are heavily favored to win, the 2A state championship against Frederick County’s Middletown. “As a coach, (winning a state championship) is one of the greatest feelings you’ll ever have,” Daniel said. “We’ll be ready for Saturday.”
cancel 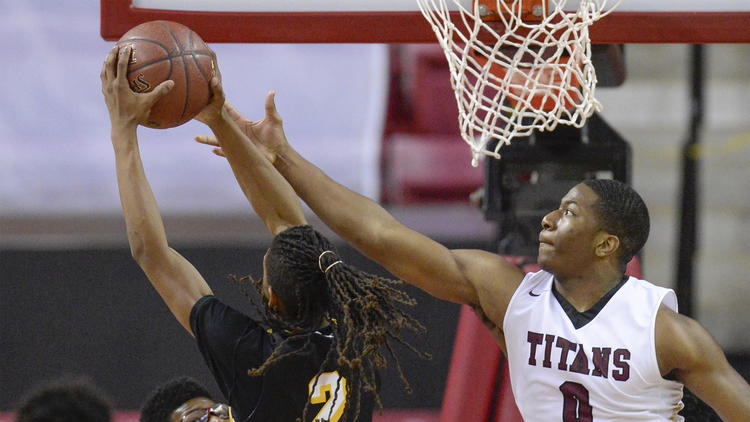 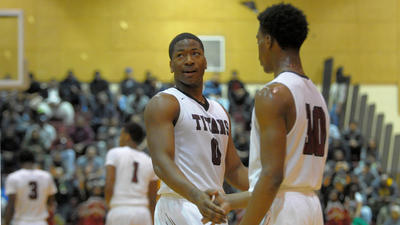