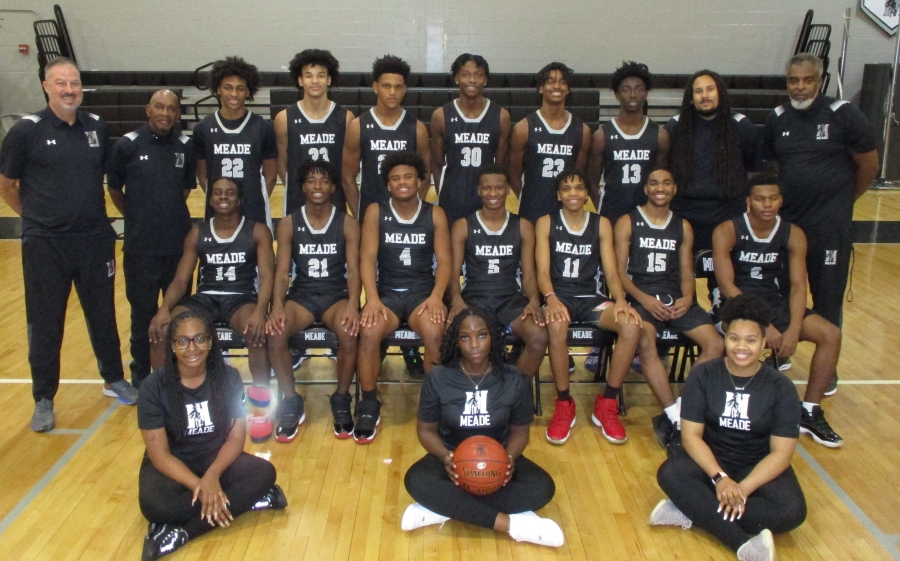 It may have been the strangest way to end a regional final — a double technical foul called with .4 seconds left, giving both teams a free shot without it possibly making a mathematical difference.

But by then, Meade couldn’t care. The glory of the scrappiest game of their lives washed over, getting them dancing. Through sheer will and clever defensive planning against the odds, the Mustangs rallied and slayed their dragon.

In a chaotic back-and-forth game in which both teams at one point surrendered significant leads, No. 1 seed Meade cascaded over its bitterest rival, No. 2 Arundel to claim the Class 4A East Region I title, 63-59. The Mustangs advance to the state quarterfinals on Friday, facing No. 6 Northwest at 7 as the third seed.

“I’ve been involved with a lot of games and that was probably one of the grittiest, gutsiest performances I have seen in 29 years of high school coaching,” Mustangs coach Mike Glick said.

Meade’s second quarter comeback was Herculean enough, but even more impressive was what came later. Arundel destroyed the Mustangs’ 12-point lead in the fourth on a hot streak, took the lead and fouled out one of Meade’s stars, Andre Campbell, all in one fell swoop. Then the Mustangs just kept missing every free throw chance they got.

Rather than crumbling, the Mustangs bucked up; they kept within a point of the Wildcats until senior Xavion Roberson’s free throws and layup recaptured Meade control for good. As he did, chants of “MVP” rose to a crescendo.

“Anybody on this team can be that guy that night,” said Roberson, who had 17 points. “I’m not the MVP. The whole team is.”

In that is Meade’s entire season’s essence. They trusted one another to regroup on the floor when their offense wasn’t flowing. They trusted assistant coach Mike Francis when he suggested switching to a triangle-and-two defense to stop both Karris Scott, whom they’d expected to play well, and Elisha Williams, who surprised them with 16 points.

Shawn Jones surprised Arundel right back, not only with his 15 points, not only with his well-earned improvement at the foul line, but even with where Meade put him, outside to draw heat out of the paint.
)
Glick believed Jones could improve after a lackluster county championship and challenged him to be better. Jones listened. He shot 5-for-7 from the stripe even as Arundel fans screamed.

The first quarter got out of Meade’s hands. As Mustangs pushed inside to try and shoot, 6-foot-7 Arundel senior Azim Sana loomed like Godzilla from the sea, batting their attempts to the earth. Meade, usually quite comfortable in the paint, struggled to establish any sort of rhythm — unlike Arundel.

The Wildcats took advantage of multiple turnovers and rebounds collected after misfired Meade shots to drum up their offense. Arundel showed as much comfortability under the net as it did from the perimeter, as both Williams and DeAndre Johnson successfully exercised their 3-point shot. Just like in the county championship, Arundel controlled the tempo.

Trailing 15-8 into the second, Meade looked more and more out-of-system. The Wildcats hassled the ball-handlers and locked down any airspace at the post. Limited to the arc, the adept 3-point-shooting Mustangs could not even land those.

While Meade scribbled on their drawing board, it kept Arundel from running away. Shot after shot dribbled helplessly off the glass. Its cushion disappeared as Jones and Campbell scratched at it. As Meade embarked on a 14-3 run, the former dished to the latter to land the go-ahead basket, 21-20.

Now, it was Arundel running to timeout, but the best of Meade was still brewing. As time expired, Roberson put Meade up 31-24 at the half. As senior Bryson Spruell got hot from the perimeter and the ball kept flowing Meade’s way, that mark only improved to 50-38 at the end of the third.

One would think a dozen-point lead would be somewhat safe. But not with Arundel.

As they gathered together before the fourth, the Wildcats swapped out the team they were in the third for the team they could be.

Arundel senior Thomas Loughry’s two 3-pointers lit the torch as the Wildcats netted 14-straight, the lead changing 54-53 in the hands of senior Messiah Anderson with around two minutes to go.

Though Meade played to an unbeaten mark in the county in the regular season, it did know defeat: a loss to City, a loss to Indian Creek. Then, of course, Arundel’s win in the county championship.

“They won that championship and they thought they won it all,” Roberson said. “We already knew we was gonna come back.”