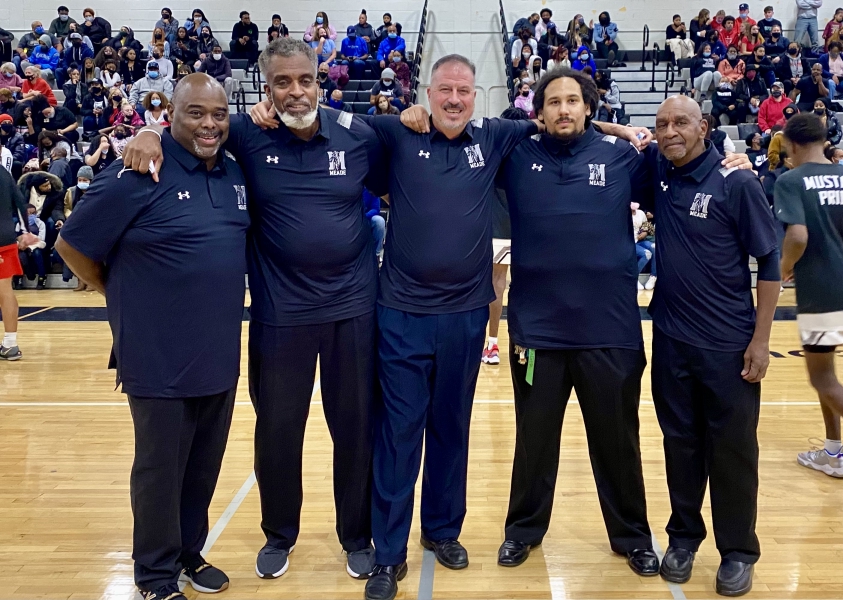 Above all, Meade boys basketball has always played for each other. It’s what got them this far and it’s what directly led to their ultimate thrashing of Glen Burnie on Monday night.

Behind double-digit performances from multiple starters, the No. 1 seed Mustangs got their groove back against the fourth-seeded Gophers, 68-48, in the Class 4A East Region I semifinal at home. After nearly losing to Glen Burnie two games before and bowing to Arundel in the county championship, it’s exactly what Meade needed before the region final.

But, this isn’t Meade’s first win since Arundel, who the Mustangs next play in the Class 4A East Region I final on Wednesday.

Though unofficial, the Mustangs scrimmaged Oxon Hill, one of 3A’s top contenders, last week and crushed them by 17 points.

“Best game we had all season. It was a springboard for this game,” Meade coach Mike Glick said. “It really gave our kids some confidence.”

Senior Bryson Spruell, who led Meade with 21 points, typified the exact kind of confidence and brotherly love that spurred the Mustangs from his coach’s point of view. Fellow senior Andre Campbell (12 points) spirited down-court, flicking him the assist in the corner that soon became a 3-pointer. Both smiled.

This journey holds a special position for Spruell. His older brother, Bruce, played for the championship 2014-15 squad.

“That’s been my dream, ever since I saw him do it,” Spruell said.

For ages, no Meade basket was enough to spark a run. Spruell didn’t like that.

The senior sunk a pair of 3-point shots before collecting a steal from Kyree Scott to drop in another basket, helping Meade to an 18-11 cushion after a quarter.

This was no standalone spurt: behind Spruell, the Mustangs shoved double-digits between themselves and Glen Burnie. Campbell got in on the perimeter action. Xavier Roberson (11 points) came alive. The Gophers recovered and started rattling off layups again, but against Meade, who’d started giving itself more chances off the glass, two points every other possession wasn’t enough. Meade’s defense began having an effect it’d been looking for in the first, smothering Gopher ballhandlers and forcing turnovers.

It was a night-and-day difference from their previous meeting.

“We did not shoot the ball well then. [Glen Burnie] coach [Mike] Rudd had an excellent game plan and executed it, doubling Shawn Jones in the post, that really affected us,” Glick said. “We didn’t have the energy we had today.”

There were just two things bugging Meade: The first was foul trouble. Both Spruell and Campbell entered the second half tagged with two fouls; Spruell suffered another early in the third. Then there was the stripe. Meade has struggled at the foul line all season, and Monday was no different as the Mustangs shot 7 for 18.

But as the game progressed, Meade improved. It shot 2-for-8 in the first half, but 5-for-10 in the second.

“All you can do is work on the mental,” Glick said. “We’ll work on it in practice.”

That continued to stick them in the side as Glen Burnie kept pace in the third, having improved its boxing out, led at the net by senior Braxton Clarke (eight points).

But the thing that got Meade out of offensive scrapes over and over again was the very thing that’d gotten them to an unbeaten regular season in the county: sheer, unadulterated chemistry.

Meade’s passing outshined Glen Burnie’s defense, leading to a pair of treys and a sea of putbacks. It seemingly didn’t fear the mounting fouls pinned on its best shooters anymore, and how could it? After leading 56-34 into the fourth quarter, Spruell, then marked with four fouls, dropped five points in 20 seconds.

“Bryson’s gotten so much better at the intangibles, rebounding, getting loose balls, steals,” Glick said. “I couldn’t be prouder of Bryson. He’s playing his best basketball. He’s gotten better every time.”