From strangers to perfection: Meade boys basketball learned to trust one another on route to a perfect county record 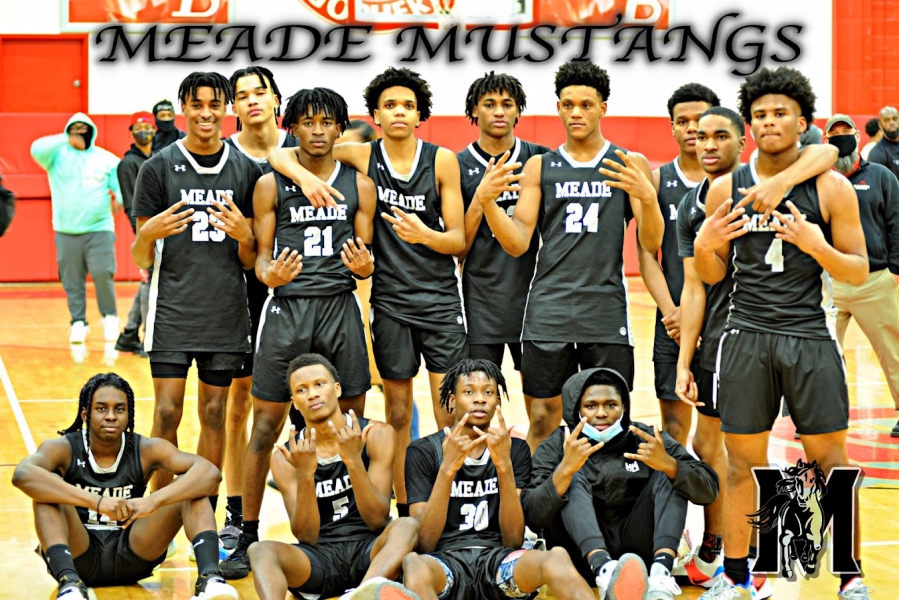 It’s less than a day before the Anne Arundel County basketball championship and the sound of laughter can be heard in the Meade High School halls.

The boys basketball team crowds to watch film of its previous Arundel game it won by a single point, 62-61. There’s no break in the merriment; coach Mike Glick clicks back and forth between free throws — John Teague in the video is about to miss both of his shots, and all the boys, Teague included, are grinning, clowning one another. On screen, Xavion Roberson makes some sort of gesture when the winning buzzer sounds and there’s howls from this audience.

Saturday’s game is the highest stakes yet, and the Mustangs are happy, stress-free. These boys, who hardly knew one another a few months ago, trust each other now. It’s hard to believe that at one time, the team rolling into a county championship with an undefeated county record, didn’t have that before.

“We all wanted the same thing: a state championship,” senior Andre Campbell said. “Everybody wanted it as bad as each other.”

Because a canceled 2020-21 season amidst the pandemic wiped out a whole winter of development and team bonding, most coaches fretted over building chemistry in their programs before this season’s start. Glick shared those concerns as much as anyone.

The players weren’t total strangers. They glanced one another on AAU teams, asked “You’re coming to Meade next year?” A few suited up for junior varsity in 2019-20. But as whole, they weren’t friends. Glick remembers during early-season practices, the players took water breaks in silence.

Glick and his staff circled up his players after one of the first practices to talk. They hashed out whatever they wanted to say to one another, and they were honest. Brutally so, as much about the bad as they were about the good things.

“We just got close after that,” said Teague, who’d never felt like he could talk with people he didn’t know before. “We got a little group chat called ‘State Champions.’ We’re trying to go to the states after all.”

That’s not to say they were perfect from then on out. Early in the season, Meade played a bit selfishly, Glick said, trying to spin fancy plays out of overconfidence. But now, the Mustangs pass the ball around, wait for the second touch to shoot, making defenses play longer.

It’s the biggest point of pride for Roberson — not the skills, not the winning, but the why of it.

“The unselfishness. Everybody doesn’t care, we all just want to see a win,” said Roberson, who has 61 assists. “We’ll do whatever we need to do to get it.”

That unique quality readily comes from their variety: there’s no Division I star sopping up all the attention while his teammates prop him up. They’ve all adopted the same mantra: whoever’s hot in that moment, get him the ball.

Meade rains down buckets, extends unbeaten streak in county to 16 with win over South River »
They’ll rematch the Wildcats with a squad in which four players average double figures: Roberson (15.3 points per game), junior Shawn Jones (12.5), Bryson Spruell (11.7) and Kyree Scott (10.1). Campbell, who missed part of the season to an ankle injury, is on the cusp with 9.3 and leads in steals (42, tied with Roberson).

“The kids don’t have egos on this team. Everybody’s in a situation where they’ll sacrifice for their teammate and their brother,” Glick said. “That’s a special bond this team has and it’s one reason we went undefeated in the county.”

The Mustangs are undeniably in their prime right now after dropping 13 3-pointers on South River on Monday – their second 13 3-pointer-performance in a week. That’s why it was helpful for them to nearly lose to Glen Burnie on Wednesday.

It’s still fresh; they’re still not quite sure why their shots didn’t fall, but they didn’t. They know the Gophers guarded Jones. They know a point separated themselves and crushing defeat.

“They found a way to win,” Glick said. “This team has won two one-point games and two two-point games. I’m proud of how they stick together. They’re able to face adversity and not turn on each other and get frustrated.”

There are two out-of-county losses. Emotionally, the Mustangs hardly count their first against Indian Creek: they were still getting to know each other then. The subsequent loss against City in late January? That was different.

Jones rolled his ankle and couldn’t play. His teammates told him then if they’d had him, things would be different. Jones told them: no.

“After that loss, we took that as everybody steps up,” he said. “… We started taking things seriously.”
)
None of this was expected. Campbell recalls some community members telling him Meade wouldn’t be very good this year. They didn’t have size, they couldn’t guard, no shooters. Lately, classmates approach the players at school and tell them they’re coming to watch them. Meade folks pack the stands now, roar to the heavens at every play.

The doubt didn’t stop after the first few wins. Jones remembers people telling him they’d lose to Southern. Then Arundel. He took it to heart.

Meade drops rival Old Mill with balance, strong team play in convincing 80-45 win »
“We’ve always been a basketball school. And it’s like, if we’re bad, they think we’re just tall and we have bad grades. But when basketball stands out,” Jones said, “and we have good grades and we can multitask — that gets the change of heart. People can think, ‘Oh, they’re not bad kids.’”

Every player names a different game as to when he feels like the team became who they are now.

Jones says it’s that early Indian Creek loss. Teague says Glen Burnie, the first time when they blew the Gophers out, because they could see how good they are. But the reason is always the same: that’s when they understood each other, how they play and how to play with one another.

That’s why the pressure doesn’t bother them too much. Roberson said it doesn’t affect him at all and it’s because of trust.