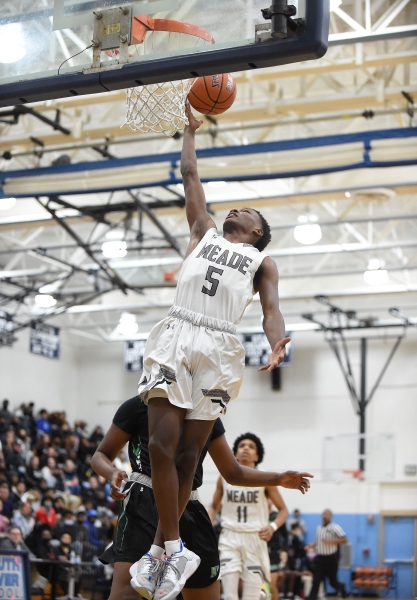 The Meade boys basketball team went into Tuesday’s game at rival Old Mill with an emphasis on starting each half with extra energy.

The Mustangs did just that, adding a dominating stretch in the middle of the second quarter and leaving plenty left at the end.

With a balanced offensive effort — junior guard Xavion Roberson and senior forward Bryson Spruell each scoring 18 to lead four players in double figures — the Mustangs ran away with a stunning 80-45 win in Anne Arundel County play.

Meade improves to 12-2 overall and remains undefeated in league play with a 12-0 mark. Old Mill, which was without starting point guard Ryan Stacy due to injury, falls to 9-5 and 9-3, respectively.

The Mustangs had two bits of added motivation going into the game: They had their 10-game winning streak end last week against City and they believed in the first meeting against Old Mill — a 73-71 home win on Jan. 6 — they weren’t at their best.

On Tuesday, Meade coach Mike Glick saw some of his team’s best play of the season.

“They really responded and I thought for us, that was the best we’ve shared the ball all season and that’s key to us winning. That’s what we’ve been working on all year long,” he said. “We don’t have selfish players — sometimes we get a little bit one on one — guys thinking they can do things on their own having confidence in themselves. But we’re a much better team when they move the basketball and create open shots. I thought that’s what the difference was in the game tonight.”

The statement was never more evident than during a 21-1 run covering 3:47 of clock in the second quarter when the Mustangs built a 34-15 lead.

High school varsity sports roundup from Feb. 1. »
The stretch featured aggressive defense, extra passes and good aim from the perimeter to go with efficient drives to the rim.

Midway through the second quarter, the Mustangs made four swift passes — the final one had Kyree Scott finding Spruell in the right corner for the second of four 3 pointers in the game-changing run.

The Patriots would gain momentum with their own 9-2 run to close out the half — junior guard Malcolm Day scoring seven of his game-high 22 points in the stretch — cutting the lead to 36-24 at the break. But the Mustangs opened with the first five points of the third quarter and they pulled away from there. Junior forward Shawn Jones finished with 16 points and provided strong work on the boards, while Scott added 14.

“We just all bought in,” said Roberson. “We didn’t play very well the first game — we only beat them by [two] points — and we thought we could have played so much better. We’re just playing like that every day at practice so it’s just another day for us. … We came out here and we were prepared.”

“At the beginning, we were all separated. But as the season goes on, we all hang out away from basketball and it’s become something bigger than basketball. Our chemistry is playing a big part of what we’re doing and where our record is at right now,” he said.

While the injury to Stacy, who is expected back soon, forced his Patriots to take on different roles, Old Mill coach Greg Smith wasn’t looking for excuses. Instead, he hopes to find answers soon.

“We’ve got to come together as a team — it’s just that simple,” he said. “We went into halftime with a little bit of momentum cutting the lead down to 12, but we just came out flat. So they were playing team basketball and we were playing too much individual basketball.”

Meade next hosts Broadneck at 7 p.m. Friday. Old Mill returns to action next Tuesday at North County with game time set for 5 p.m.