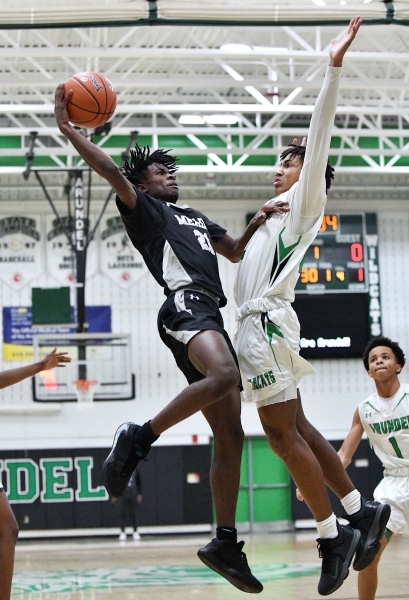 Meade senior Bryson Spruell faced a 10-point, fourth-quarter deficit as calm as one could possibly be. He prodded one corner of the court, settled his feet and shot: 3-pointer.

He tried the other corner: 3-pointer. Then 10-point spread was whittled to two.

If he could just make one more.

From the center of the arc, Spruell sunk one more, putting Meade ahead.

When Arundel recaptured the lead from the foul line, Spruell did not panic. Instead, he did it again.

Those four 3-pointers fueled the Mustangs’ epic comeback against Arundel in an eventual 62-61 victory in what could’ve been a preview of what’s to come in the regional playoffs.

“It is just beautiful,” Mustangs coach Mike Glick said. “It was a total team effort. The kids are a resilient bunch. A lot of teams would’ve folded in this environment.”

The win also finally served revenge against what the Wildcats did nearly two years ago.

Spruell grinned as he thought of it. What was once a painful memory — Arundel defeating Meade in the region championships in 2020 — is now resolved. This Mustangs team is mostly juniors on down, but for Spruell and the seniors who were then junior varsity, it was long-awaited revenge.

“I was tired of losing. I had to step it up,” said Spruell, who led the way with 13 points. Junior Xavion Roberson had 10.

Meade nearly tumbled in the third quarter just as it did two years ago. Arundel pushed ahead by 10 and the Mustangs could not seem to claw back. But this was not the same team. It was methodical in deploying three timeouts. Each time, Glick and his staff reminded the players, stay in the game.

Meade certainly benefits from its three seniors but that’s not solely what got the team to buy-in come the fourth quarter. It’s simple, really. They’re a team in the truest sense.

“It’s not me, it’s not the coaches. It’s a group that likes each other,” Glick said. “It’s not a group that’s selfish. They share the basketball. That was evident the first week of the season.”

Size did not aid Meade. Arundel’s system was perfect: 6-foot-9 Azim Sana easily floated assists to the likes of Karris Scott (13 points), deposited his own or plucked rebounds.

That’s how Arundel cruised to an early 8-0 advantage and drove Meade, uncharacteristically panicked, into a timeout in under two minutes.

Perhaps that did the trick. The Mustangs remerged a renewed beast, their passing and shot selections more confident, more on-brand. But pretty quick, they realized how tough Arundel really was.

Senior Messiah Anderson sparked another Wildcats run with back-to-back baskets. But Meade rallied to get within 16-14 after a quarter.

Meade adjusted to the size discrepancy boxing out. Both Spruell and Glick attested that success predominantly to bigs John Teague and Shawn Jones.

The margin didn’t change after the second quarter, Arundel led 31-29 at halftime.

Glick challenged his players then to stay in the game.

“It motivated me a lot,” Spruell said. “Really, we all just came out with energy. That’s what we needed.”

The game began to follow a little bit of a pattern in the third quarter. As soon as Meade caught up, the Wildcats would collect a little steam, push ahead and send Meade into a timeout.

While Arundel remained consistent, Meade scored, some, but did not string together streaks. The Mustangs fell behind by double-digits for the first time and were down 48-39 after three.

High school varsity sports roundup from Jan. 25. »
Spruell is more than comfortable with 3-point shooting, which carried Meade in the fourth. In-game, his coach said he sometimes needs the second touch to get it.

“I’m really proud of Bryson. He stepped up in the biggest game of the season,” Glick said. “… We challenged him at halftime. I was proud of his rebounding and defense.”

Key plays from Spruell and Jones among others in the fourth told Meade one thing.

“Tells me we’re the best in the county,” Spruell said.