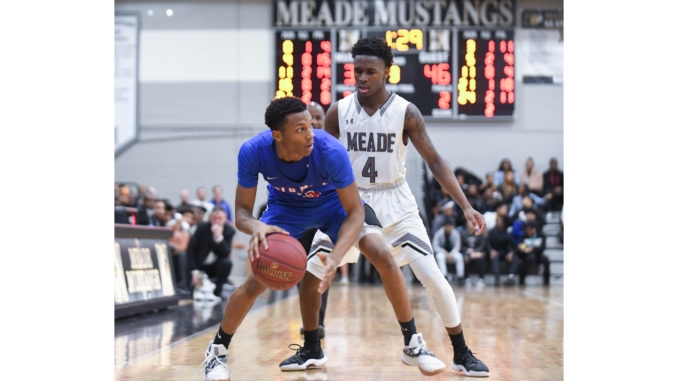 In his first season as head coach of the Meade High School basketball team last year, Mike Glick took a very young Mustangs team to the Class 4A East Region title game. This year, Glick is going to push his squad to go further.

“Our goal is to win the county and state championships, and that’ll remain our goal every year that I’m at Meade,” Glick said. “I think we have a team that can challenge in both those [areas].”

Meade High graduated its two top players from last year’s squad, Tre Dunn and Mazhi Thames, but didn’t lose anyone else.
Junior guard TJ Speight, who cemented himself as a vital piece to the team during his sophomore campaign, figures to lead the team.

“He’s become a much stronger player from taking part in football and going through [Meade varsity football] Coach [Mike] Francis’ workouts,” Glick said. “His shot is tremendously improved and he’s one of the best athletes in the county — just a tremendous athlete.”

Junior center Devin Barksdale is also returning to the basketball program after taking a year off.
“[Devin] is a very versatile big man who can score inside and out,” Glick said. “He’s a tremendous rebounder and space-eater.”

Glick is adding a couple of new faces to his coaching staff, too. Tommie Duvall, a local youth coach with over 20 years of experience, is joining the staff as a junior varsity assistant.
Francis, current head coach of the varsity football team and former basketball coach of county rival Old Mill, will join the varsity bench.

The cohesion between the football and basketball programs at Meade isn’t something that every high school boasts. This year, Glick’s squad will feature four players who played under Francis on the football team.
“At any public high school, everybody shares the assets,” Glick said. “So for us, it’s vital having a two-sport athlete. And with Coach Francis, I’m blessed to have him on our coaching staff. He’s been a great addition for us.
“We have a phenomenal working relationship where the players know that there’s no problem with them playing football and basketball.”

“I hope they go out there and have a good time and enjoy themselves,” Cobb said. “I know they want to win, but at the end of the day, they’re kids.

“My wife and I support them every game. Here or there, we don’t care — we’re there to support them.”

One of the biggest changes coming to Maryland high school basketball this year is a new playoff format.
Once the postseason tournament is down to eight teams — the quarterfinals — the participants will be reseeded. They are reseeded once more for the semifinals.

It isn’t unheard of for two or more of the best teams in the state to come from the same region. In the old format, those teams would necessarily play each other in their regional bracket. The new format leaves open the possibility that those schools would face off deeper in the playoffs.

Regardless of what the postseason might hold, Glick is not getting ahead of himself. With the new playoff format, there’s even more reason to take every last regular-season game seriously.

“[If we succeed] it means that we are able to put the ball in the basket and score consistently,” Glick said, pointing out that the team’s identity ultimately lies in their defensive schemes. “For us, that’s what it’ll come down to. … We have three or four bigs who can rebound the basketball. We’re extremely athletic.
“Our focus is going to be putting the ball in the hole. We struggle when we don’t score.”
Glick’s efforts to coach up his team and push them further into the postseason is not lost on the team or their families either.

“[Glick can] bring out the best in any one of his players,” Todd Bishop said. “We’re very excited about watching. We have a team full of juniors, so we’re really looking forward to their progression this year.
“And we’re super excited about how much more they’ll get done next year with another year under their belt.”