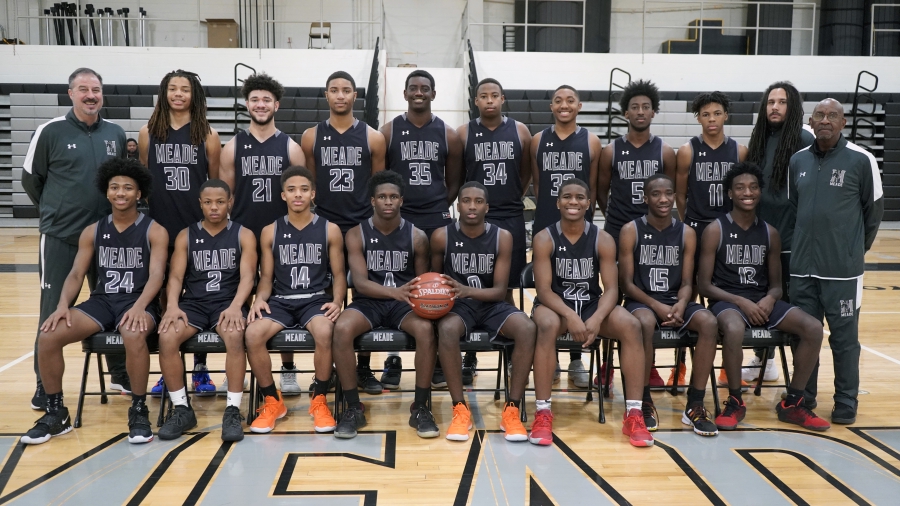 There was something about the “oooh” from the crowd when Meade junior Nasir Brockington gave his guard the slip, about the explosion of cheers from the bench as Brockington’s jumper sailed in before the buzzer, that felt a little different.
The Mustangs were moving with energy flowing through each step. That’s not something they were always used to.

But it was something that awarded them with another game to play in the 4A East region playoffs.
Consistency on shots from field goal range and the foul line gave No. 5 seed Meade the ingredients it needed to hand its rival Old Mill a thrashing in its own gymnasium in the 4A East Region quarterfinal, 82-49 — the Mustangs’ largest point total this season.

Meade moves on to face top-seeded North County on Tuesday in Glen Burnie.

“I’m just so proud of the way our kids have bought in," Meade coach Mike Glick said. "We’ve lost so many close games. We’ve lost seven games in which we were tied or down, with the ball, with the chance to take the lead or tie the game with a minute left. The kids never gave up.”

This week, junior TJ Speight (16 points) told his teammates that the regular season was long gone, and the playoffs marked a new year. That meant the Old Mill that hung Meade out to dry on transition points twice earlier in the season was gone, too.

“We talk about in practice how we got to get back on defense, we got to play hard. … It was 0-0 and now it’s 1-0. We came out flat the whole regular season, wasn’t doing what we had to do, so in practice, we told everybody we got to go hard, rebound," Speight said. "Everybody go 100 percent, do what we got to do so we can win.”
That kind of mentality was only possible because of the growth made internally by Meade this season after losing its senior leadership to graduation.

“Everybody had to pitch in and not be selfish," Brockington said. "This is a team game. Beginning of the season, everybody was selfish, worrying about them. Coach Glick had a talk with us, saying, it’s a team. We all need everybody to win.”

Senior Corey Williams (13 points) struck the flint to spark the beginning of the end for Old Mill.
The 6-foot guard shot three-straight baskets to break a tie with the Patriots in the first quarter, including a 3-pointer that both gave Meade the advantage and earned a “boom!” from his coach and teammates.
And yet, for a moment, Old Mill seemed to have rocked back onto its feet, with a triple by junior Alex Diggs (15 points) that tied things at nine.

That lasted about as long as cold weather in this Maryland winter.
Six-foot-5 Meade big Devin Barksdale carved out some room with a few putbacks before the buzzer, Brockington nailed a following triple to open the second and Speight continued to whittle away with good shots from the free throw line.

The Mustangs would go on to put up a nearly perfect 20-for-21 mark from the stripe — the best, Glick said, Meade has shot all season and a stark contrast to Old Mill’s 6-for-13 performance.

Junior Delonte Johnson’s bucket to close out a 10-0 Meade run before halftime, which earned an even more emphatic “boom!” from Glick and subsequent layup helped the Mustangs cross the border into rout territory.
“We’re a very deep team. We’re a team that can play 10 guys on any given day, any one of the 10 guys can step up and play, and that was the best we’d shot the ball this season," Glick said. “Our struggles have been, all season, that we can’t score. Getting guys coming off the bench hitting shots, I thought, was the difference offensively.”
But the Patriots that hustled out of the locker room were not the same ones that headed in with 38-18 deficit on their shoulders.

Old Mill came back, and you could blame it all on Meade. The Mustangs had momentarily lost the energy that now radiated from the Patriots as they knocked down five field goals, scoring seven points unchallenged, from a team with a revitalized sense of competition.
Suddenly, the Mustangs were back to 14 points up with momentum on the opposite end of the court.
So they reversed it.

Johnson picked a steal off the Patriots and rocketed it from going out of bounds to Omar Beattie, who hooked it in. Before long, after Speight’s basket, Johnson’s triple and Beattie’s pair from the foul line, Meade was right back where it wanted to be, riding a 26-point advantage, 59-32.
The Mustangs decided to have a little fun with it now.

Brockington drove the ball inbound, with his assigned Patriot, Diggs, staring him down. Brockington shifted left to right to left, eyes on the basket, and then stepped to left. Diggs dropped to the floor, and Brockington released the jumper that would bring all of the Meade crowd’s love down upon him like rain.

“I just wanted to score, get something for the crowd," Brockington said. "I think it pumped a lot of energy. It got the bench going, fans off their feet.”

With a 61-35 lead entering the fourth quarter, not one Mustang slowed his pace toward victory. Beattie drained a 3-pointer; Speight hit both of his free throw opportunities along with both baskets. That was the last move by the main players before Meade brought in its subs, who were then able to tack on another six points. With it, the Mustangs are hauling the exact kind of momentum they believe can quash North County. In their last meeting eight days ago, Meade fell by just three points.

“Hey, they’re the number one seed. We have nothing to lose," Glick said. "We played them twice and both games were very, very close games. We know them well, they know us well. We got to have a good couple days of practice and get out there ready to play on Tuesday.”