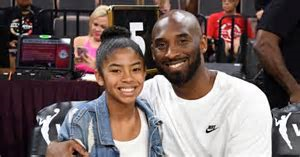 Los Angeles Lakers guard Kobe Bryant celebrates with his daughter following the Lakers’ 99-86 defeat of the Orlando Magic in Game 5 of the NBA Finals at Amway Arena in Orlando on Sunday, June 14, 2009. Bryant and his daughter Gianna died Sunday in a helicopter crash in California. (Stephen M. Dowell/Orlando Sentinel/TNS)

For Archbishop Spalding boys basketball coach Josh Pratt, watching his 9-year-old son Joey playing in a youth basketball game should have been a happy moment, one that he’d always enjoyed.
Then, Pratt’s nephew sent him a text letting him know that former Lakers star Kobe Bryant had died. Bryant and his daughter Gianna were two of nine people killed in a helicopter crash outside of Los Angeles on Sunday morning.
Advertisement

The longtime NBA veteran, who had spent 20 years in Los Angeles, amassed over 33,000 points in his career and garnered five NBA titles, two NBA Finals MVP awards and two Olympic gold medals.
Basketball had been a through-line in Pratt’s life and his long coaching career. Pratt began coaching in 1993, three years before the Lakers drafted Bryant. Bryant, 41, was only a few years younger than Pratt.

Kobe Bryant’s death leaves NBA players, others in shock: ‘There will never be a greater warrior in our sport’

In the grocery store after the game, Pratt was enveloped by mourners looking at their phones, taking in the news. Life goes on but the Crofton resident hugs his children a little bit tighter.

“This happens, it puts things in perspective,” Pratt said. “You could tell he was a wonderful dad to his daughters, which makes it all more tragic. I’m still trying to process it all really.”

Meade basketball coach Mike Glick, whose long career accomplishments link to the NBA, includes mentoring multiple professional veterans like Rudy Gay at Archbishop Spalding, was watching the Maryland men’s basketball game when his son texted with the news. Horror washed over him.

“He’s one of the best players to ever live,” Glick said. “He’s an icon, and he’s positively affected millions of people around the world. It’s a horrible loss to humanity.”

The circumstances of the tragedy, and the loss of the John Altobelli, his wife Keri and daughter Alyssa — fellow parents with their child, heading to a travel basketball game — were all too familiar to him.

“I think of the amount of hours I’ve spent in cars taking my three sons to national baseball tournaments,” Glick said on Sunday. “I’ve done the same thing Kobe was doing this morning. It’s tragic.”

When the news struck Southern coach Will Maynard, he’d hoped it was a hoax — born out of the hype surrounding LeBron James surpassing Bryant for third on the NBA all-time scoring list the night before.

When he’d realized the news had been confirmed, and then the subsequent news about his daughter Gianna, it put Maynard in a daze. He’d been watching the Maryland game, too, and preparing to rebound from Friday’s loss to Annapolis to keep Southern as the No. 1 seed in Class 2A.

But as the news sunk in, he couldn’t watch film anymore. For three to four hours he scrolled through Twitter, silently pleading that some news outlet would walk it back, say it wasn’t true after all.
He thought of Marvin Wallace.

“I lost a kid in the beginning of the (school) year a few years ago. First week of school,” Maynard said. “He was never able to put on a Southern uniform, but he played for us during the summer and he would have made the team.”
Wallace was 14 years old, just one year older than Gianna Bryant, when he died.

“I remember the effect that had on the kids, on the community. It wasn’t a national story, but seeing someone that young just when the best times of your life… to be taken away is tough,” Maynard said. “Never question God, but it was an unfortunate situation.”

Maynard recalled when he was young, when University of Maryland first team All American Len Bias died two days after getting drafted by the Boston Celtics in 1986. Pratt will always remember where he was when Bias died, just as he will never forget what he was doing when word arrived about Bryant.

“We tend to believe tomorrow’s always guaranteed, but in this situation, it shines light that you’re never guaranteed to see the next five minutes," Maynard said.