Patriots move to 3-0 after defeating Thunder 21-7 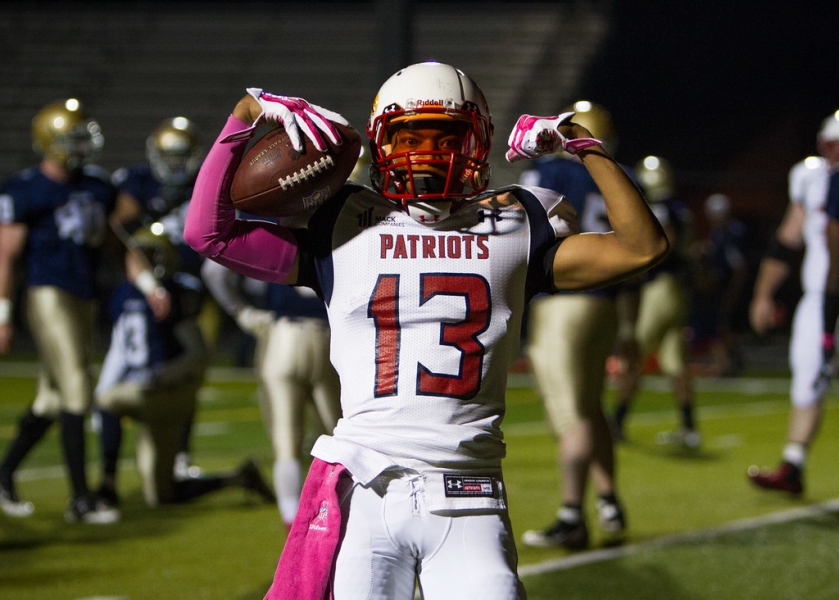 The Lincoln-Way Patriots moved to 3-0 this season in conference play after defeating the Chicago Thunder 21-7 this past weekend following a bye week.

After a scoreless first quarter, the Patriots broke into the scoring collumn first when quarterback Tony Powell connected with Steve Trudo on a 10-yard touchdown pass. Trudo caught the swing pass on the right hash and evaded tacklers while he scampered into the end zone. Rafael Alvarado’s extra point put the Red and White up 7-0 with 3:06 remaining in the half.

With the Thunder trying to get a drive together before the end of the half, Patriots’ defensive lineman Perry Sanders made a jumping interception at the line of scrimmage and preceded to return it 32-yards for a touchdown. “They were trying to set up a screen. I had my head on a swivel trying to locate the running back, then the quarterback tried to lob the ball over my head. All I could think was catch the ball” said Perry.

The turnover gave the Patriots a two score edge entering the break. “ I thought someone would catch me from behind, I really think I wouldn’t score until I crossed the goal line” said the 330 pound defensive tackle.

The Thunder would make things interesting in the fourth quarter when Alvarado attempted a 52-yard field goal which sailed just short, and then was returned to the Patriots 12-yard line. After touchdown pass was called back by penalty, the Thunder would capitalize on a 6-yard touchdown run by Darelli Middleton. The Patriots lead was slimmed down to 14-7 with 10:31 remaining in the fourth.

Following the Thunder’s score, Anthony Hughes returned the following kickoff 37 yards out to the Patriots 46-yard line. After the nice return, Powell took the Patriots on a six-play drive completing a perfect four-for-four, including a 10-yard touchdown pass to Javonte Keys in the front right corner of the end zone with a defensive back trailing right behind him. “ I am just trying to get my team that W by any means possible” said Keys. That concluded the scoring with 7:27 remaining in the game. “ When my number is called I will be there to answer just like I trust every single one of my teammates to do the exact same” said Keys.

The Patriots defense forced four interceptions against the Thunder. Interceptions came from Perry, Alex Fuller, Frank Redding, and Chris Muhammad. The tough and physical defense has now only allowed 46 points through the first three games, which leads the Mid States Football League Southern Conference. “Our great defensive line play is freeing up our linebackers to make plays and puts good pressure on the quarterback without blitzing that creates trouble for anyone playing us” said Sanders.

The (0-3) Chicago Mustangs will travel to visit the (3-0) Patriots this Saturday July 16th. Kickoff is set for 6:00 PM at Anderson high school. The game can be seen live on www.Chicagolandprepreport.com with Tim Mather and Tyson Roth on the call.