hide
hide
No announcements have been posted yet for Lawn Dr.

A. Minutes from 10-3-22 were discussed and approved.
B. Discussed current financial status of the league including the awards banquet, trophies, league rental fees, championship shirts, softball inventory, uniforms, etc. After everything is paid by years end, the league will have a balance of approx. $2000. Therefore, the league fees will remain at $55 per player for 2023.
C. Sponsor fees will be increased to $400 per year beginning in 2023, due to price increases in softballs, field rental, new uniforms, umpires, scorekeepers, etc. However, if sponsor fees are paid prior to January 1st, the fee will be $350.
D. Discussed current sponsors, those that are leaving and new sponsors that have already expressed interest for 2023. We are still looking for at least 3 more new sponsors to come into the CSSA.
E. The awards banquet will be held on 11-15-22. Currently there are 97 people registered along with 25 sponsors. The BOD has decided to add a few extra seats to bring the total to 132.
During the banquet the BOD’s will present the American Homeless Veterans with 2 checks of $1750 each, and $1000 to the City of Refuge.
F. A huge thanks goes out to Tom Cameron for his continued great work in organizing and heading up the fall golf tournament.
G. Calendar of 2023 events:
1. Tryouts/evaluations will take place on Saturday & Sunday February 25th & 26th and March 4th & 5th
2. Open practice will be held March 6th – 11th
3. Opening of spring season will be Monday, March 13th.
H. Winners for the Arnold Fowler, Lowell Lawson and Jeff Nichols Awards were certified for 2022, and winners will be announced and presented at the banquet.
I. Due to the Christmas holidays, and also being a slow time for the league, the next BOD meeting will be held on Monday, 1-10-23.

Get Your Tickets Now for the 2022 Awards Banquet!

Hey CSSA friends, don’t miss your chance to attend the 2022 Awards Banquet on Tuesday, November 15th! Tickets are just $25 per person and on sale now. The November 6th ticket sales deadline is fast approaching! This years’ event promises to be fun, delicious, festive and full of good fellowship. Relive the season highlights with your teammates, help out Toys for Tots, and maybe even win a door prize! Get your tickets now at:
https://cssasoftball.org/product-category/events/ .

Michael Fortenberry of Orb Design and Manufacturing, Inc. would like you all to know that they have some great opportunities for part time work! They would like to hire some retired folks—players, wives, etc. for some interesting jobs. Here are their requirements:

1. Wanted, a retired machinist who could do assembly of mechanical items and would be willing to learn to operate and maintain a water jet. Would like someone willing to work a couple of days a week, occasionally more. Woodstock area.

2 Wanted, someone to do bench type electrical assembly work, building cable assemblies and wire harnesses. Prefer someone with wire crimping experience and soldering would be a plus. Requirement is for part to full time with flexible work hours. Some experience required. Woodstock area.

CSSA BOARD MEETING MINUTES
October 3, 2022
The monthly meeting of the CSSA Board of Directors was held October 3, 2022, at Wicked Wings, Kennesaw, and called to order by Norman Thiem at 6:40 P.M.

A. Minutes of the September 12, 2022 meeting, having been emailed to all, were Board approved.
B. 2022 Sponsors: Norman Thiem proposed that sponsors be encouraged to pay their 2023 sponsor fees by December 31st, 2022 because fees may have to increase from $350 to $400 beginning in January due to inflationary factors (increased cost of balls, etc.) There are several new sponsors interested in joining the CSSA sponsor roster including Mellow Mushroom, Renasant Bank and a player who would like to remain anonymous.
C. Treasurer/Financial Report: Norman Thiem presented a complete profit/loss report. After paying final expenses, there will be approximately $6,000 in the bank at the end of the year. CSSA has 50 logo hats for sale for $10 each. Contact Norman Thiem or Randy Bergman to purchase one or more.
D. 2022 Awards Banquet: Ray DeLuca discussed finalized plans for this year’s banquet, which will take place November 15th at Fendley Farmstead in Canton. The event will be catered by Sidelines Prestige Catering and ticket cost will be $25.00. The menu will include southern favorites plus dessert. Player-sponsors will receive 2 free tickets as usual. Tickets must be purchased in advance no later than November 6th on the payment portal at https://cssasoftball.org/product-category/events/ . Paper tickets will not be issued. There will be no ticket sales at the door. All those attending are requested to bring a new unwrapped toy for the holiday toy drive, “Every Child Deserves a Christmas,” and there will be a 50/50 fundraiser at the event as well. An announcement will be posted on TeamPages with all details. Volunteers are needed for the check-in table and 50/50 ticket sales at the event.
E. Arnold Fowler Award: All are encouraged to participate in nominations for this award, and the cutoff for nominations will be October 7th. If you would like to nominate someone for the 2022 Arnold Fowler award, please do so by submitting a written detailed reason as to why you think this person deserves this prestigious award. Please include your name and phone number.
Address your nominations to Ray DeLuca via email Djray351@aol.com or postal service: 105 Rock Creek Drive, Canton, GA 30114 (770) 355-3911
Nominations must be received NO LATER than October 7, 2022. Past winners of this award are not eligible. To view the list of previous recipients, click here: https://www.teampages.com/organizations/2042/pages/85742
F. Fall Charity Golf Tournament: This popular fundraiser will take place on November 2nd, benefiting two veterans organizations. Fees will be $90 per player and participants should bring a new unwrapped toy for the kickoff of our annual toy drive. Fees should be paid as soon as possible at: https://cssasoftball.org/product-category/events/ as the cutoff date for registration is October 26th. Stacie Pittman has created a flyer for the event which all managers should share with their players to get people signed up for this important fundraiser. See the flyer by clicking on the link at the end of the article here: https://www.teampages.com/organizations/2042/announcements/2330041-CSSA-Fall-Charity-Golf-Outing-November-2nd-2022-
G. Lowell Lawson and Jeff Nichols Award nominees were discussed and vetted by the Board, and the board voted to confirm the recipient of the Jeff Nichols award for 2022.
H. TeamPages Website Replacement: Dan Bonham announced that we are seeking a person with the technical ability to create and populate the statistics module for the new website.
I. Halloween Softball Tournament – Birmingham: Norman Thiem announced that Mike Jackson will be raising money for homeless children at this annual tournament October 31st in Birmingham.Contact Norman Thiem (770) 757-8467 for more information.
J. Returning Jerseys at End of Season: All managers are responsible for collecting jerseys from their teams and getting them turned in to their league directors or Norman Thiem as soon as the season is over. The new jerseys are costly and the league cannot afford to replace jerseys.
K. Motorcycle Ride: Randy Bergman announced that a group of people will be riding on Friday, October 7th to Dahlonega and then to Dawsonville for lunch at the Dawsonville Pool Room http://www.dawsonvillepoolroom.com/ and if anyone is interested in joining, to contact him or Jerry King. 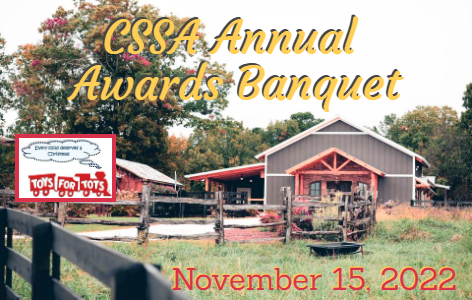 Attention players, spouses, fans, managers and sponsors, don’t miss your chance to attend this year’s awards banquet, which will take place on Tuesday, November 15th from 6:00-9:30 p.m. at Fendley Farmstead, 1287 Sardis Road in Canton, Georgia. Ray DeLuca, CSSAs special projects director and banquet coordinator has a very special event planned for us this year. Not only does he make all arrangements for this annual event down to every detail, he serves as Master of Ceremonies and always does a fantastic job.

This year’s menu will feature delicious Southern classics like chicken fried steak and fried chicken, as well as vegetables, dessert and drinks.

Tickets are only $25.00 per person for an evening of great food, celebration and fellowship. Tickets MUST be purchased by November 6th at the CSSA payment portal: https://cssasoftball.org/product-category/events/ .

All those attending are requested to bring at least one new unwrapped toy for our holiday toy drive, “Every Child Deserves a Christmas.” And be sure to have some cash on hand for the 50/50 raffle/fundraiser too!

As always, player-sponsors receive free tickets–just be sure to contact Ray DeLuca ASAP (by November 6th) at (770) 355-3911 to secure your reservation. Sponsors who are not players will receive their ticket information by mail.

You don’t want to miss this year’s awards banquet. Only 200 tickets are available, so get them early!
p=. Buy yours now at https://cssasoftball.org/product-category/events/