CHEROKEE SENIOR SOFTBALL ASSOC. WOODSTOCK, GA
HOLDING SIGN UP AND LEVEL EVALUATIONS FOR
p=. Fall 2017 SEASON
REGISTRATION IS OPEN TO MEN TURNING 50 YEARS YOUNG IN 2017, AND OLDER
(WE HAVE (300 +) PLAYERS FROM 50 THROUGH THEIR 80’S IN OUR ORGANIZATION)
6 PM EACH DAY
on
Tuesday July 11th
And
Tuesday July 18th
HELD AT
HOBGOOD PARK, FIELD #4
(BELLS FERRY & TOWNE LAKE PKWY)
WOODSTOCK, GA 30189
FOR MORE INFORMATION
VISIT our WEBSITE AT:
www.cssa.teampages.com
We have leagues Mon Morning: TUE Night:
WED AM & PM and may add a Thursday League 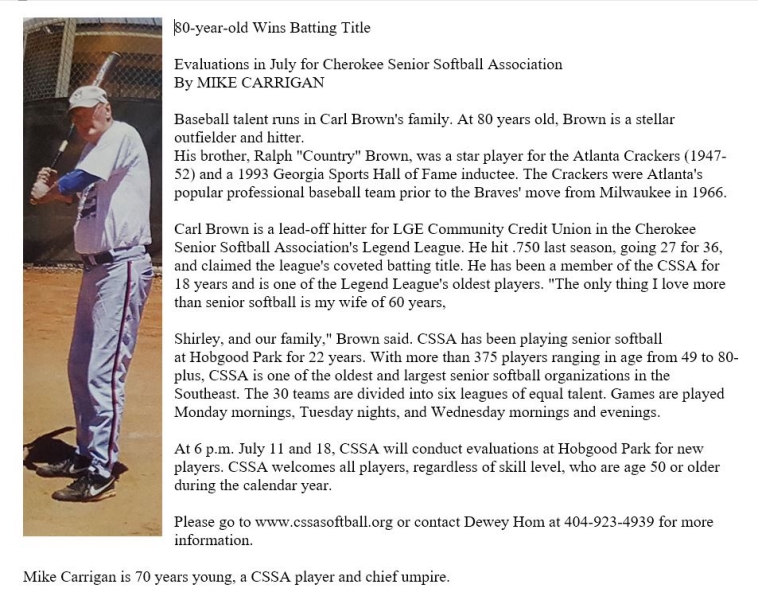 Hey guys new this year. For each player you recruit and pays his fees you will get a $5 reduction on your own fees.

From the magazine getting around Acworth.