West Warwick advances to the semifinals with a surprising victory over Slocum, 2-0! 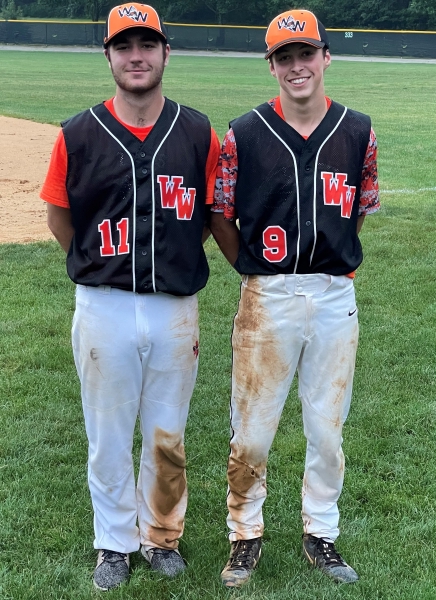 Led by the solid pitching of Quinn Kortick (#9), West Warwick upset Slocum Baseball, 2-0, in game three of their quarterfinal series to advance to a semifinal matchup against Chariho.

With the help of catcher Chase Joubert (#11), Kortick, who normally catches and plays in the infield (shortstop or second base) for WWCM, struck out seven batters and allowed just three hits in six shutout innings of pitching.

Dominic Carollo, who was making his first appearance on the mound in over three weeks, struck out two batters in a scoreless seventh to earn the save.

In the top of the first inning, West Warwick scored the first run of the game when Sean White singled to right field, moved to second on a grounder back to the pitcher by Kortick, advance to third on a single to right by Joubert and scored on a fielder’s choice when Josh Pedus grounded out to short.

Down 1-0 in the bottom of the fourth inning with two outs, Slocum received back to back hits from Wyatt Daft (single) and Josh Lincourt (double) to put runners at second and third. Calvin Battersby, West Warwick’s stellar centerfielder, took away a sure extra base hit away from Chris Cambio to end the inning.

Chase Joubert gave WWCM an insurance run in the sixth inning when he doubled, stole third and scored on a passed ball.

Josh Lincourt, who struck out five batters, allowed just one earned run on three hits in 5 2/3 innings of work for Slocum.

What made tonight’s game unusual for West Warwick was the surprise start of WWHS senior to be, Quinn Kortick. During the spring, he is the Wizards starting catcher and during the summer he has been primarily used as a utility player. However, with head coach Matt Grenier needing a fresh arm to start after playing five playoff games in seven days, he turned to Kortick, who had thrown only 4 1/3 innings this summer. The result … West Warwick’s first ever semifinal appearance in Rhode Island Connie Mack State Tournament play.