hide
hide
No announcements have been posted yet for U12 Division.

A. Do not just send your children to practice or a match; take him/her and actively participate. Volunteer to! Every coach will welcome it and even expect it. It is often echoed, “.... but I don't know anything about soccer. Most of the people you see volunteering now were once in the same position as many of you -most of us did not grow up with soccer. We "old timers” simply started as interested, green parents. (Jan 5, 1995)

B. Try to learn the rules -they are very simple. Attend a “rules clinic ' or ask your coach to explain ones that you do not understand.

C. Practice the basic skills with your child at home -it will show him/her that you care, and it will show you how difficult some of those things really are.

D. Make sure your child attends every practice, has a good night's sleep and appropriate meal well before practices and matches.

E. Help your child to remember to notify his/her coach in advance if he/she must miss practice or a match.

F. Attend every practice and match that you can, and at matches, shout encouragement, not criticism. Keep yourself under control at all times -do not scold your child, his/her coach, opponents, or referees.

G. Abide by the decisions of your child's coach as to where and how much he/she decides to play your child. If you disagree and choose to talk about it with the coach, make a point to ask him during the next practice, not between the 3rd and 4th quarters or just after a tough match when the coach should be talking to his/her team rather than to an unhappy parent.

H. Provide feedback to the coaches and Board of Directors throughout the soccer season. Do not wait until the season is over, because it may be something worth correcting immediately. Again, use good judgment as to the exact timing.

A. The game of soccer is for the benefit of our children and above all should be fun for the participants.

B. Coaches and fans should encourage all youth in their efforts.

C. Demeaning action or language will not be tolerated or directed at any participant in the games by coaches or fans. No cursing or swearing is permitted by coaches or fans. Uncontrolled or unsportsmanlike conduct will be subject to the Boards review. (Jan 5, 1995)

E. The referee is in complete control of the game and shall be treated with respect and dignity at all times by coaches and fans. Comments about referees are to be directed to the Coordinator of Referees.

G. Referees shall utilize yellow carding (warning) and red carding (ejection) to enforce the MSL Coach and Fan Behavior Rules. If a fan is given a red card, that person shall leave the field area. Any fan receiving a red card shall not be permitted to attend the next game played by the coach's team. (Jan 5, 1995)

A. The major responsibility of the program coaches is to provide an atmosphere of fun and learning. The coach must constantly remind him herself that he/she is teaching children who have agreed to play and learn soccer. These children are not dedicated adults who already know the game and want to win every match.

B. The coach should pause after each practice or each match and ask the question of whether the coach's expectations are truly consistent with his/her players' abilities. Always be realistic!

C. Coaches are expected to practice the basic philosophy of the program learn the "Rules of Soccer" and teach the rules to their players and their parents.

D. Coaches are expected to identify and train their replacements by involving interested parents at practices and games. Be supportive of their interest. By involving other, new volunteers can be added to the program.

E. Coaches must be in control of themselves at all times -both at practices and during matches. (Jan 5, 1995)

1. Uncontrolled or unsportsmanlike conduct will be subject to the Boards of Directors review. (Jan 5, 1995)

F. Coaches are expected to practice their teams a minimum of once a week and on match days, have their teams in proper attire and ready to play on time. (Jan 5, 1995)

1. Notify each member of the team before each practice and match as to time and place. Encourage 100% attendance and participation every session. (Jan 5, 1995)

H. Coaches should "facilitate" the following objectives of the NATIONAL SOCCER COACHES ASSOCIATION OF AMERICA.

1. YOUNG PLAYERS MUST HAVE FUN:

A. The best coach is the one whose players, after a practice or a match, can say, “I HAD FUN! SOCCER IS A LOT OF FUN”.

2. Young players must be put into situations where they experience success. (Jan 5, 1995)

A. Practice sessions and matches must be organized to facilitate success.

B. As players increase competency, raise the level of difficulty, but insure that they still experience success.

1. Coaches must be perceived as one who is happy, helpful, and knowledgeable, teaches them soccer, only deals with positive reinforcements, etc.

2. Young players should perceive "winning" as a very low priority. Coaches must emphasize trying hard and playing for the fun and excitement of playing. (Jan 5,1995)

I. Coaches of every team are responsible for their schedules, any changes or problems must be taken up with the Baord of Directors two weeks in advance of the affected League Schedules. (Jan 5, 1995)

J. Coaches may ask a referee for an explanation for a call or no call. However, the referee need not answer the question during the game or may give a brief explanation. (Jan 5, 1995)

K. Referees shall utilize yellow carding (warning) and red carding (ejection) to enforce the MSL Coach and Fan Behavior Rules.   If a coach is given a red card, that person shall leave the field area. Any coach receiving a red card shall not be permitted to attend as a coach or fan the next game played by the coach’s team. (Jan 5, 1995)

Posted by Ben Schenkel at Mar 25, 2013 5:00PM PDT ( 0 Comments )
more editing options
Caution – a disciplinary action in which the referee shows a player the yellow card (for violating a soccer rule, obviously). A second caution in the same match results in the player being shown the red card (ejected from the game).

Corner kick – a direct free kick that is awarded when the defending team puts the ball over the end line. A corner kick is taken by the offensive team from next to the corner flag.

Dangerous Play – an action by a player that the referee considers dangerous to that player or others. Examples are high kicking, playing while lying on the ground, or playing the ball while it is in the possession of the goalkeeper.

Direct Free Kick – a free kick that is awarded at the spot of the infraction for a physical contact foul such as tripping, holding, pushing, tackles from behind, jumping into an opponent, or for hand balls. A direct free kick can score by going directly into the goal. It does not have to be touched by anyone other than the kicker.

Drop Ball – a method of restarting a game where the referee drops the ball between 2 players facing each other. A drop ball restarts the game after play is stopped for no penalty situation (e.g. after an injury) and in other circumstances (more than one soccer rule about this). The ball is dropped where it was last in play or at the nearest point outside the penalty area.

Foul – when the referee judges a violation against an opposing player. The team that suffers the foul is awarded with a direct free kick unless the foul is committed by a defensive player inside his own penalty area, in which case the foul results in a penalty kick.

Goal Kick – a type of restart that is awarded when the attacking team puts the ball over the end line. The ball is kicked from anywhere inside the goal area away from the goal to restart play. After the kick is taken, the ball cannot be touched again by any player until it is outside of the penalty area.

Indirect Free Kick – a free kick that is awarded at the spot of the infraction for other fouls that are judged not to be serious such as obstruction, dangerous play or charging (non-contact fouls), as well as for offside. Indirect kicks must touch another player (either team) before the ball goes into the net in order to score.

Not good enough for you? Ok, ok. Here it is: a violation that occurs when an offensive player is closer to the opponent’s goal than both the ball and the second-to-last opposing player at the time that the ball is passed to the offensive player by his or her teammate. Players cannot be called offside if they are in their own half of the field or if they receive the ball from a throw in, corner kick, or goal kick. When a player is called offside, the opposing team is awarded an indirect free kick. See the Soccer Rule Page for more information on the offside rule. Video Explanation

Obstruction – a foul in which a defensive player, instead of going after the ball, illegally uses their body to prevent an offensive player from playing it.

Penalty kick – A kick taken from 12 yards in front of the goal as a result of a contact foul or hand ball that takes place inside the penalty area.

Red card – a referee shows a player a red card to signal that the player has been banned from the rest of the match. A red card can be shown for a single serious offense or as the result of being shown a second yellow card in the same game. After a player is shown a red card, the player must leave the field of play and cannot be replaced by a substitute, meaning that his or her team must finish the match with one player fewer.

Sending off – an ejection resulting from a player being shown a red card. See also Red card

Throw-in – a way to restart play when the ball goes out over the sidelines. The team that did not touch the ball last is allowed an overhead throw. 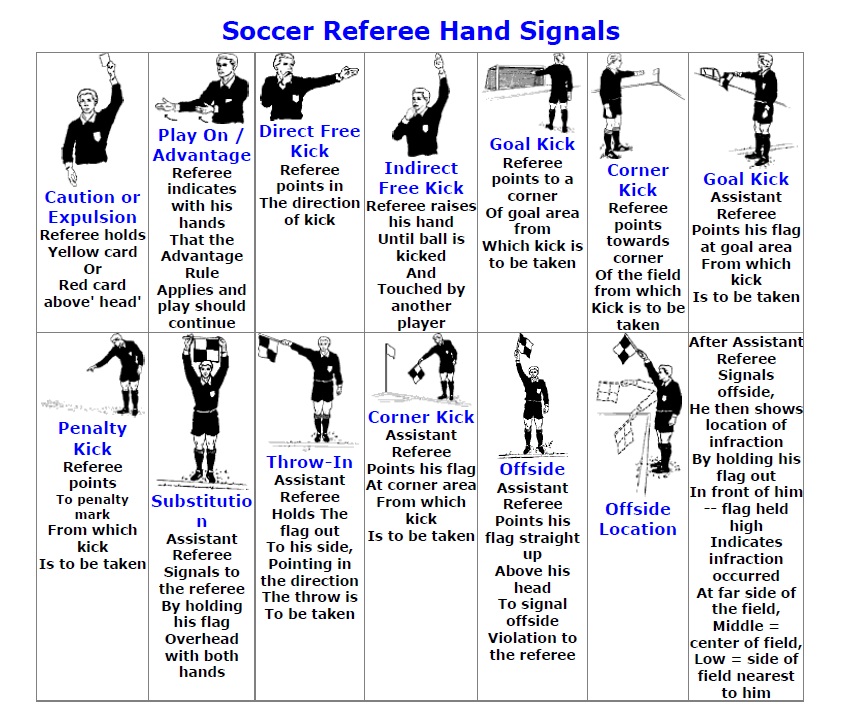 What Your Child Needs

What your child needs

They will need shin guards, and soccer cleats.  These can be purchased at K-Mart, Wal-Mart, Hibbet Sports, Zides Sport Shop, Shoe Depot, all in Marietta or Dunham's in the Vienna mall.  The soccer league will provide jersey for games as well as socks for games.  Players can where whatever shirt and pants/shorts that they want for practice.  A ball is suggested for practice but not required: U6 and U8 use a size 3 ball, U10 and U12 use a size 4 ball, and U15 uses a size 5 ball.