hide
hide
No announcements have been posted yet for Andre Chiefs. 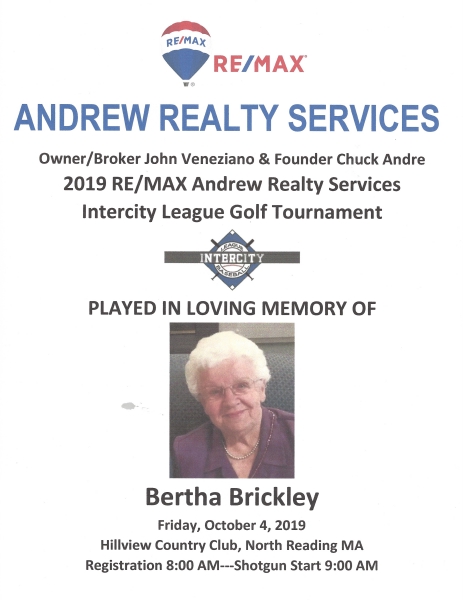 North Reading, MA- Over 100 golfers will be teeing off on Friday in the RE/MAX Andrew Realty Services’ Intercity League Golf Tournament at Hillview Country Club.

This year’s tournament will be played in memory of Bertha Brickley who passed away in 2018. Ms. Brickley was an avid supporter of the ICL. Her sons John, George, Quintin, Matt and Andy were all involved in the ICL while her daughters Lila and Raina were fans of the league. Andy is presently the Boston Bruins’ color analyst on NESN. The ICL is thankful to the Brickey Family for their generosity.

The response has been overwhelming for the first annual tournament according to event chairman Orazio Azzarello. The shotgun start will begin at 9:00 AM with lunch and the awards ceremony to follow.

The event has drawn ICL alumni as well as many present players and fans.

RE/MAX Andrew Realty Services, whose connections have long standing ties to the ICL through owner/broker John Veneziano and founder Chuck Andre, both of the Andre Chiefs, is the main sponsor for this year’s tournament. The company has offices in Medford and Stoneham.

Other sponsors include Rick DeAngelis of the Lexington Blue Sox, Mike’s Pastry of Medford and the North End, and On Demand Storage, both thanks to James McConville of the Somerville Royals.

Registration begins at the Hillview on Friday at 8:00 AM. 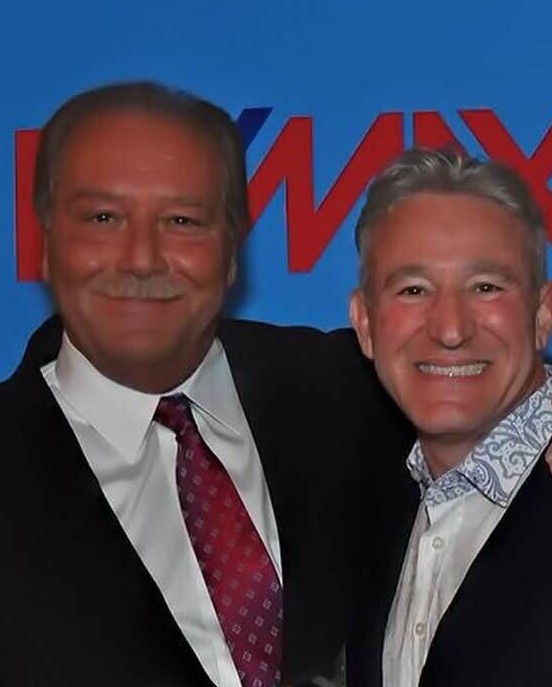 RE/MAX Andrew Realty Services will be the sponsor of the 2019 Intercity League Golf Tournament that will be held on Friday, October 4 at the Hillview Country Club in North Reading, MA.

The company and its connections have long standing ties to the Intercity League through Founder Chuck Andre and Owner/Broker John Veneziano. Both Andre and Veneziano began their ICL careers playing for the Hosmer Chiefs in the 1970’s & 1980’s.

Following their playing days, Andre and Veneziano entered the real estate business in 1986. They took over the Chiefs franchise in 1989 and renamed it the Andre Chiefs. Andre served as Chiefs’ Manager from 1989-2018 while Veneziano has been part of the coaching staff.

The RE/MAX Andrew Realty ICL Golf Tournament begins with a shotgun start at 9:00 AM.

RE/MAX Andrew Realty Services has offices in Medford and Stoneham.

Malden, MA – What a difference a day makes!

In a game that was the opposite of the first game’s pitcher’s duel, Lexington outslugged the Chiefs for the 9-6 win and a sweep of their semifinal series at Pine Banks Park Thursday night and advance to the finals.

Ross Curley’s grand slam in the top of third gave the Blue Sox the lead for good at 5-2. The first Blue Sox run in the inning came after a walk to Taylor Ferguson and a single by John Puttress put runners on the corners with no outs. Aaron Barbosa followed with a single up the middle that scored Ferguson and it was 2-1. Kyle Adie reached on a fielder’s choice and the bases were loaded for Curley. He quickly cleared them with a drive that went well over the leftfield fence.

On Wednesday, a lone run won the game. In game two that number was eclipsed in the bottom of the second when the Chiefs finally put a crooked number on the scoreboard.

With one out Matt Maloney walked and was followed by singles by Nick Leva and Mike Burgoyne to load the bases. Tony Serino singled for his second of three hits on the night, and was 1-0 Chiefs. Mike Gedman walked with the bases loaded to force in a run for a 2-0 lead.

Though the Chiefs’ Zach Kirby lasted until the sixth, neither starting pitcher was as good as in the first game.
After his teammates gave him a 5-2 lead, Lexington starter Junior Pena could not shut down the Chiefs who cut the lead to 5-3. The Chiefs also suffered a loss in the inning. Maloney, who hit a line drive into center for what appeared to be a single, and that drove in Nate Witkowski (double). Unfortunately Maloney had collapsed at home plate and was eventually tagged out by Sox catcher Puttress. Maloney left the game with a knee injury.

Sox reliever Jake Vesling had come in in the third and struck out Leva to end the threat. He started the fourth by getting Mike Burgoyne on a fly ball to right. The next five Chiefs batters reached base on three singles and two walks to close to within 7-6. Ben Waldrip’s RBI single brought in the first run and Kyle Dembrowski closed out the scoring for Andre with a two-run single.

Bill Christopher entered the game for Lexington after Dembrowski’s single and got a strikeout and ground out to end the fourth. He retired the Chiefs in the fifth, despite giving up two walks and was the first Sox pitcher to not give up a run.

Borja Jones-Berasaluce had a 1-2-3 sixth with two strikeouts and Lexington was three outs from a sweep.
Lexington closer Manny Delcarmen entered the game in the seventh and gave up a two-out single to Burgoyne before getting Serino looking for the final out and the Blue Sox were on the way to the championship round.

Curley was 4-for-4 with three runs and four RBI to lead Lexington. Richie Burgos added a two-run single in the fourth. Number nine hitter Puttress had two hits and scored twice.

Lexington awaits the winner of the Alibrandis – Wakefield series which Wakefield knotted at 1-1 with a 2-1 win in 12 innings Thursday night. The third and final game will be at Victory Field Friday night starting at 7:30.
The finals will for the held at Melrose’s Morelli Field for the sixth consecutive season.

Thanks to Bruce Hack, Lexington Director of Media Relations

Lexington, MA- An Aaron Barbosa infield single was the difference when the Blue Sox edged the Chiefs, despite another stellar effort from Tim Dunphy, 1-0 in game one of their best of three series on Wednesday night in Lexington.

The Chiefs had a couple of large opportunities to take this one. They were stymied by the Blue Sox pitching duo of first Mike Geannelis, and then Manny Delcarmen, leaving the bases loaded in the second inning and two more runners in scoring position in the seventh.

The game featured an outstanding duel between Geannelis and Dunphy, and a giveth then taketh away performance by Delcarmen in the top of the seventh. Geannelis got the win, Delcarmen the save, and Dunphy obviously deserved a better fate.

Following a rapidly played first inning, the Chiefs mounted a major two out threat in the top of the second. After singles by rookie Matt Maloney and Andrew Caulfield, Geannelis hit Nick Leva with a pitch to load the bases. The threat went by the boards when Geannelis got Mike Burgoyne to pop up to end the inning.

There was nothing doing for either side over the next few innings until the Blue Sox scored the game’s only run in the bottom of the fifth. Dunphy got Kyle Adie to ground to Ben Waldrip for the first out, before catcher Mitch Schroeder lined a single to right and Morgan Brown reached on a single into the shortstop hole. Dom Zaher then grounded out to Maloney at second, moving the runners up to second and third with two away. The game winner came when the rapid Barbosa hit a chopper to short and just beat Nate Witkowski’s throw to first, on a banger, as Schroeder crossed the plate. Dunphy then promptly got Ross Curley to pop out to end the inning to keep it a one run game.

The Chiefs went in order against Geannelis in the top of the sixth and Dunphy set Lexington down in succession in the bottom of the inning.

Delcarmen, the former Red Sox righty and present Lexington closer, came on for Geannelis to begin the seventh and Kyle Dembrowski and Andrew Caulfield greeted him with back to back singles. Evan Reynolds then pinch ran for Dembrowski. With Maloney taking the first pitch on a sacrifice bunt attempt, Schroedrer looked to have Reynolds picked off second. Reynolds took off for third and beat the throw with Caulfield moving up to second. With Chiefs in business big time and having the tying and go-ahead runs in scoring position and nobody out, Delcarmen showed his back class and struck out Maloney, pinch-hitter Michael Nestor, and then Burgoyne in order to end the game.

Geannelis went six innings, gave up three hits and struck out five. Dunphy gave up six hits, three of the infield variety, and struck out one. There were no walks in the game.

Chiefs Chatter…. Game two of the series will be played on Thursday night at Pine Banks on the Malden/Melrose line at 7:45 PM…..MLB should take note: the game only took 1 hour and 18 minutes to complete…..The respective sides was retired in order in five of the thirteen half innings that were played…..The Blue Sox left four on base while the Chiefs left six stranded, four of those in scoring position…. Alibrandis shutout Wakefield 9-0 in game one of the other semi-final series……

Chiefs Open Semi-Final Tonight, Game to be Broadcast Live by LSP at 7:45 PM 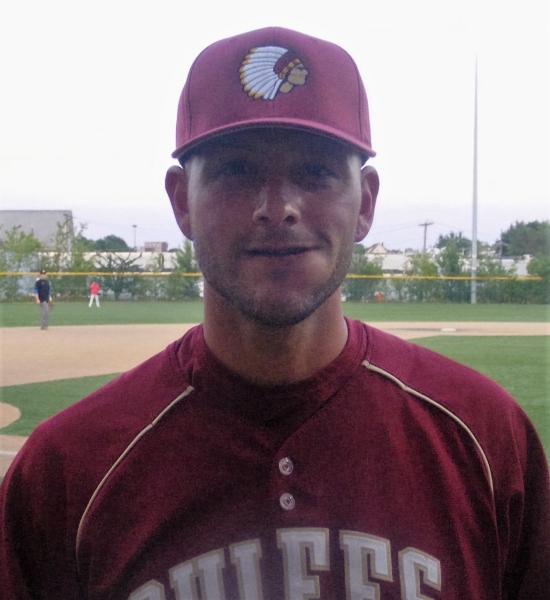 Lexington, MA- The Chiefs will open their best of three semi-final series against the Blue Sox tonight at Lexington High at 7:45 PM.

The game will be broadcast live by Local Sports Productions. Click on https://www.localsportsproductions.com/live/

The Chiefs and Blue Sox have met in the ICL Championship Round seven times in the past ten years. Game two will be played on Thursday at Pine Banks located on the Malden/Melrose line at 7:45 PM. A potential game three would be back in Lexington on Friday at 7:45 PM.

Manager Steve Gambale (pictured) is expected to give veteran lefty Tim Dunphy the starting nod in game one.

The Chiefs got to the semifinal round by sweeping the Reading Bulldogs. The Blue Sox won the regular season pennant and received a first round bye.

The winner of the Chiefs-Blue Sox series will move on to meet either Wakefield or Alibrandis in the best of five championship round.

All games in the championship series will be played at Morelli Field in Melrose.